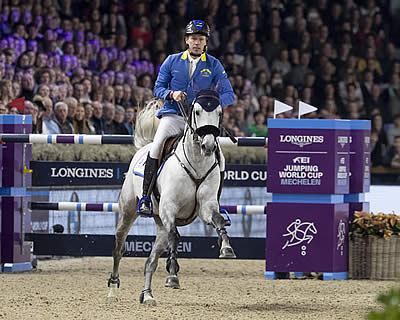 Kevin Staut is runner-up in four-way battle of legends

Germany’s Christian Ahlmann (44) clinched a thrilling last-to-go victory at the ninth leg of the Longines FEI Jumping World Cup™ 2018/2019 Western European League at the Nekkerhal Stadium in Mechelen, Belgium. In a tense competition from which only four of the 39 starters emerged to battle it out against the clock, the crowd was treated to a feast of legendary proportions, because these were four of the greatest masters of their craft, and they put on an exhibition of showjumping at its very best.

Ahlmann is a four-time Olympian and former FEI World Cup™ champion, and it was Rio 2016 Olympic team gold medallist Kevin Staut (38) from France whom he pinned into runner-up spot, while World No. 1, The Netherlands’ Harrie Smolders (38), lined up in third. Ahlmann’s compatriot, Ludger Beerbaum (55) has long been one of the biggest names in the sport, but this time around he had to settle for fourth when things didn’t quite go his way in the jump-off.

The first-round course set by Belgium’s Eddy Geysemans tested horses every inch of the way, with the first fence, the double at eight, and the triple combination at 10 all taking a steady toll. But only a single time fault kept Ireland’s Denis Lynch (The Sinner), Italy’s Lorenzo de Luca (Armitages Boy), and Celine Schoonbroodt-de Azevedo (Chepetta), one of 13 Belgian contenders, from making the cut into the second round. The 71 seconds time-allowed was tight, but as Geysemans said, “the best riders were able to make it – if we had changed the time after the first three riders, we would have had more clears, but the jump-off was great as it was!”

Staut led the way with a stunning run from his new ride, the 10-year-old Edesa’s Cannary, which he has only been competing since October and which raced through the timers in 40.98 seconds to set the pace. Smolders took time to check his route carefully before setting off with the 14-year-old stallion Don VHP Z, the horse that helped him claim individual silver at the 2017 FEI European Championships in Gothenburg (SWE). But they weren’t quite fast enough when galloping home in 41.42 seconds.

Beerbaum was well in touch when turning to the first of the two remaining elements of the triple combination two fences from home, but he lost his line and the 15-year-old gelding Casello ran past the fence, racking up 14 faults and leaving it wide open for Ahlmann as he set off, last to go. And Ahlmann had his game-face on from the start, weaving his way around the twisting track with the fabulous grey stallion Clintrexo Z who stopped the clock on 39.87 without hardly turning a hair. It was an amazing performance for a horse of just nine years of age.

“We built him up in the stallion approvals and later in young-horse classes, and Judy (his wife Judy-Ann Melchior) did some 3 and 4-Star Grands Prix and then allowed me to take him over and move him up another step. He won in Wiesbaden in May and Münster in August and he’s quickly growing into the big sport now. He really loves it, and he gets better and better week after week.” — Christian Ahlmann (GER)

And he was extra-happy that he did well because his family, including his young son Leon, were watching from the sidelines. He says Clintrexo Z is made of the right stuff for the top end of the sport.

“In the ring he knows exactly what to do and he is afraid of nothing. Whether he’s competing in Aachen or here it wouldn’t make any difference to him; he’s always really positive and tries his best – he’s everything you could wish for!”– Christian Ahlmann (GER)

Now the man who has competed at seven FEI Jumping World Cup™ Finals, including Leipzig in 2011 where he came out on top with the great Taloubet Z, has the 2019 Longines Final in Gothenburg, Sweden next April in his sights. In sixth place with 46 points on the leaderboard he is easily qualified, and he’s spoiled for choice about which of his horses to take there.

Runner-up Staut was also very happy. “This was my goal coming here – not to be second but to gain more points to get to the Final!” he said, having moved into third with 51 points to his credit.

Basel in Switzerland will stage the next leg of the Western European League series in two weeks’ time.