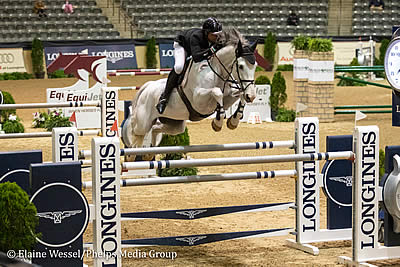 Lexington, Ky. – Oct. 31, 2020 – Show jumping reached its pinnacle Halloween evening at the 137th National Horse Show when it hosted the highly-anticipated $213,300 National Horse Show Grand Prix CSI4* within the Alltech Arena. Tested over a masterful pattern from world-renowned course designer Guilherme Jorge (BRA), entries from the seven nations of the United States, Great Britain, New Zealand, Ireland, Canada, Israel, and Brazil battled head-to-head for a shot at substantial prize money. Leading the jump-off from start to finish, Devin Ryan (USA) and LL Show Jumpers LLC’s Eddie Blue turned in a performance that was unparalleled, galloping to an early lead that could not be caught to clinch the lead spot in the victory gallop and the lion’s share of the purse. Earlier in the day, Raleigh Hiler jockeyed Kurt Hiler’s Cassina 64 to the top spot in the $25,000 Show Jumping Hall of Fame Amateur-Owner/Junior Jumper Grand Prix as the lone double-clear partnership.

For the CSI4* class, Jorge fabricated a course fit for the occasion that included 17 jumping efforts up to the 1.60m height spread strategically across the ring. With so much exceptional talent in the field, including Thursday’s Phelps Media Group $72,900 International Welcome Stake CSI4* winner Kent Farrington (USA), McLain Ward (USA), Beezie Madden (USA), Margie Goldstein-Engle (USA), Paul O’Shea (IRL), Daniel Bluman (ISR), Shane Sweetnam (IRL), and Rodrigo Pessoa (BRA), it was anyone’s game headed into the onset of the contest.

As the third pair in the original start list, Ryan and Eddie Blue served as the pathfinders with the first clear trip, and seven entries later Mario Deslauriers (CAN) ensured there would be a jump-off with his fault-free effort on Uris De La Roque. Continuing on through the order-of-go, Spencer Smith (USA) riding Quibelle, Kristen Vanderveen (USA) aboard Bull Run’s Risen, and Goldstein-Engle on Dicas added more American representation to the tie-breaker round, while O’Shea with Skara Glen’s Machu Picchu and David Blake (IRL) on Keoki qualified on behalf of the Irish. Lillie Keenan (USA) and Fasther also left all the rails in their cups, but incurred one heartbreaking time fault.

Seven combinations bearing the flags for three nations earned eligibility for the second portion of the competition, which showcased another expert pattern from Jorge, this time composed of eight obstacles. Once again leading the way, Ryan piloted Eddie Blue to the pace-setting round in 35.13 seconds with all the fences still upright. Smith directed Quibelle to the second, and ultimately final, foot-perfect trip just one-tenth of a second behind the leaders’ time in 35.26 seconds. Though the rest of the pack chased down Ryan and Eddie Blue, the partner he won a team gold medal with at the 2018 FEI World Equestrian Games, each duo fell victim to an unlucky rail to incur faults and keep them out of contention.

Smith and Gotham Enterprizes LLC’s Quibelle captured the reserve honors, followed by O’Shea and Skara Glen’s Machu Picchu, owned by Machu Picchu Partners LLC, in third place. The Irish team managed to be the quickest of the night in 33.71 seconds, but dropped a single fence. For his victory, Ryan was also pushed to the top of the leaderboard for the Leading Rider Award, presented by Audi of Lexington and Samuel A. B. Boone, for which he earned a $5,000 cash prize as the rider with the most points in the International Jumper section throughout the week. Kristen Vanderveen (USA) was honored as the Leading Lady Jumper Rider.

Immediately preceding the night’s grand finale, the $25,000 Show Jumping Hall of Fame Amateur-Owner/Junior Jumper Grand Prix highlighted the efforts of 24 entries over a technical course of 1.40m to 1.45m fences. The 15-fence initial course, also designed by Jorge, saw six contenders successfully complete the track without any jumping or time faults to move into the jump-off phase of the competition. As the jump-off progressed, all five of the first duos to go knocked a rail somewhere along the course, leaving the door open for the final challengers, Hiler and Cassina 64. Now with just eight obstacles standing between them and victory, the final pair to tackle the track laid down a conservative round that kept all the fences intact, securing the win for Hiler and Cassina 64. The result added to a list of top finishes for Hiler and Cassina 64 at the National Horse Show over the past few days, having already earned fourth place in the $5,000 Amateur Jumpers and second place in the $10,000 class. As the owner of the winning horse, Kurt Hiler was honored with the Jean MacColl Hart Perpetual Memorial Trophy.