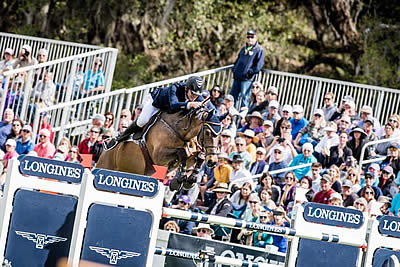 After beginning the season with a win in Vancouver (CAN), Coyle rode Farrel to the top of the Longines FEI Jumping World Cup™ Ocala (USA), besting an eight-horse jump-off. The duo crossed the timers of Olaf Petersen, Jr.’s (GER) shortened course in 37.05 seconds. Margie Engle (USA) and Dicas finished second with a 37.37-second time, while Adrienne Sternlicht (USA) and Cristalline finished third in 37.96 seconds.

“I think everything was going really well until the last turn. I had a little slip there, and I thought everything was going great until that point. I thought, ‘Have I lost it?’” Coyle detailed. “When I went through the finish and [saw] that I was able to catch the [leaders] — both of them have fantastic horses and are fantastic riders as well — I was delighted to beat them!”

Last to go and Engle to beat, Coyle executed a very different plan than the then-leader. Engle used Dicas’ massive stride to her advantage, while Coyle relied on Farrel’s swift turning, along with a sheer will to win.

“[Farrel] is a very small horse. He doesn’t have as big a jump as most horses, but he just believes he’s one of the best. Belief always overdoes talent, and he obviously has loads of that as well, but it’s his way, and he can do things that other horses can’t do.” — Daniel Coyle (IRL)

The victory secured Coyle a place in the Longines FEI Jumping World Cup™ Final, which will take place in Las Vegas (USA), 15-19 April 2020. The appearance would mark Coyle’s first in a championship.

“In the middle of last year, [my team] decided to try and aim for the [Longines FEI Jumping World Cup™ Final]. Until today, it seemed we didn’t have enough points. It’ll be my first World Cup Final, and I’m really looking forward to it.”

Sternlicht finishes the season atop the east coast standings with 61 points, one more than Elizabeth “Beezie” Madden (USA) with 60 points. Brian Moggre (USA) is third in the standings with 56 points.

Karl Cook (USA) sits atop the west coast standings with 59 points. Jenni McAllister (USA), who finished seventh in Ocala, moved into second with 40 points, one ahead of Alex Granato (USA), who has 39 points.