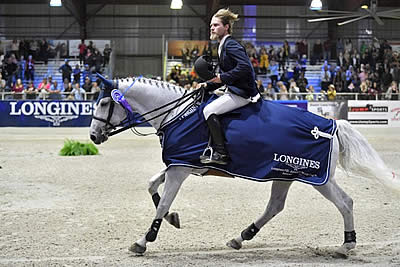 Consistency paid off for Karl Cook (USA) with a win in the CSI3*-W $100,000 Longines FEI Jumping World Cup™ Sacramento (USA). Riding the 12-year-old Holsteiner gelding Caillou, he bested a six-horse jump-off to record his first World Cup victory of the season.

Last to go, Cook positively flew through the timers of Marina Azevedo’s (BRA) shortened course, finishing in 36.75 seconds. Conor Swail (IRL) finished second aboard the talented 9-year-old Koss van Heiste with a time of 37.35 seconds, while Guy Thomas (NZL), first to contest the jump-off, was third aboard Jonkheer Z; that duo’s final time was 38.95 seconds.

“It’s always fun going last. You know what you have to do. It gives you a better feeling when you ride, because you know that whatever you do, you stay there.” — Karl Cook (USA)

Just two combinations were able to advance to the jump-off in the first half of the class, but four of the final six combinations produced a clear first round, including Cook, whose confidence was made evident by the relative degree of ease with which he navigated the challenging indoor track. In the jump-off, he used his advantageous position in the lineup to his advantage and planned a wider, yet efficient turn to the last fence that set him up for a strong gallop to the finish.

“Conor went inside [to the last fence] and did [one fewer stride], which I very well could have done,” Cook said, “but I saw how the turn after was, so I said I’d go around and do [one extra stride] and turn after quicker.”

After jumping well in Vancouver and finishing second in New York, Cook firmly cemented himself atop the west coast sub league standings of the North American League with 37 points. Zazou Hoffman (USA) sits second with 19 points, two points ahead of Kelli Cruciotti (USA) with 17 points.

“I’m really happy, because I feel like [Caillou] has been consistently there,” Cook said. “That’s what makes me the proudest.”