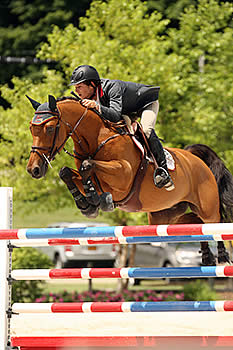 A total of 10 horse-rider combinations jumped clear in the opening round over the track set by course designer Alan Wade of Ireland to advance to the jump-off.  Three of those horses were ridden by Bluman, and it all came down to his third and final ride in the jump-off.  Agatha D’Ambra riding Udiana held the lead with a clear round in a time of 35.39 seconds when Bluman entered the grand prix ring as the final competitor.  He and his experienced mount, G&C Lagran, sped over the shortened course, stopping the clock at 35.16 seconds to take victory.

“The course designer did an amazing job, being the first week of the series,” said Bluman, 22, who currently resides in Wellington, FL.  “The course was technical, and Agatha was pretty fast.  I asked my partner, Luis Larrazabal, if I should go for it, and he said the time was catchable, so I gave it my all and it worked out well.”

Formerly competed by Venezuela’s Pablo Barrios and most recently Rodrigo Pessoa of Brazil for owner Gustavo Mirabel of G&C Farm, G&C Lagran is a new ride for Bluman.  The pair began competing together at the end of May.

“That horse has all the experience; he’s done a lot with Pablo and won a lot of good ribbons,” said Bluman of the 14-year-old Oldenburg gelding.  “He’s a winner, and wants to go clear every time.  He always tries to do things right.”

Of the horse’s personality, Bluman laughed, “He’s a prince.  If you see him at the show grounds, he is always posing and looking around at everyone to see who is looking at him.  He’s a cocky horse, but that’s what makes him what he is.”

“I want to say thank you to them for sponsoring this class and for giving me the chance to go shopping!” smiled Bluman.  “I arrived here with no money, and now I feel like I can shop for free!”

Of his second visit to the Vermont Summer Festival, Bluman said, “For the horses we have right now, it’s the best place to be.  We’re able to figure in the ribbons, and the horses love it.  It’s nice and quiet, very relaxing for us.  We’re able to rest, go to nice restaurants, and enjoy the shopping.  We’ll keep coming back!”

In addition to winning the class with G&C Lagran, Bluman also placed fourth after jumping double clear with G&C Carla, a horse owned by his brother, Ilan Bluman, and eighth with G&C Blue.

“Thank you to Gustavo Mirabel, Rodrigo Pessoa, Luis Larrazabal, and all of the grooms and staff at G&C Farms,” concluded Bluman.

Having qualified three horses for the jump-off in the $10,000 Welcome Stake, presented by Manchester Designer Outlets, Bluman will be one to watch in Saturday’s $30,000 Vermont Summer Special Grand Prix.

The Vermont Summer Festival, celebrating its 20th anniversary in its current Manchester location, offers more than $750,000 in prize money, making it the richest sporting event based on purse in the state of Vermont.