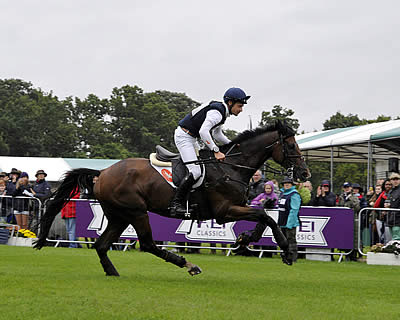 Lausanne (SUI), September 3, 2016 – Christopher Burton (AUS) and Nobilis 18 were pure class at the end of a challenging Cross Country day at the Land Rover Burghley Horse Trials (GBR), final leg of the FEI Classics™ 2015/2016. They had the second fastest time of the day – finishing just 8 seconds over the optimum time of 11 minutes 11 seconds – and now have two fences in hand to win Sunday.

Burton had to wait until nearly the end of the day and admitted to nerves. “Sitting watching in the riders’ tent didn’t help,” he confessed. “But I’m delighted now; the horse gave me a great feel.”

“Nereo doesn’t really like it at Burghley, because he’s a long-striding horse and finds the undulations difficult, but he always does the job,” said Nicholson. “I’ve got a soft spot for him. I’ve taken him all round the world and he always comes up with the goods.”

Jonelle Price (NZL), now in fourth place, was quickest of all, only 4 seconds over time on Classic Moet, but was cross with herself for having to take a muddled line through the fence dressings at the Dairy Farm (fence 14). However her performance was, in reality, brilliant, for time penalties in double figures were the order of the day even before the heavy rain started to fall around lunchtime.

Bettina Hoy (GER), the Dressage runner-up on Designer 10, admitted to feeling “intimidated” and set off tentatively, but the further she went the more polished she looked and she finished strongly with 19.2 time penalties to take fifth place at this stage.

Hoy said: “It was tough and I was a bit ‘backwards’ to start with and had to give myself a good talking-to, but what a horse! I’m so pleased. I don’t have many horses nowadays so I think I am able to have a good relationship with them and they help me out.”

Sir Mark Todd (NZL) has risen four places to sixth with NZB Campino, having feared that the German-bred 14-year-old would not like the undulating ground. Todd and Nicholson were two of the best riders through the water complex at the Trout Hatchery (20, 21), both opting for a bold four strides instead of five to on the curve from the corner to the third element, a skinny in the second pond.

Caroline Powell (NZL) has dropped three places to seventh on Onwards and Upwards with 21.6 time penalties, but France’s Cedric Lyard and Cadeau du Roi, a classy Thoroughbred galloper, have moved up from 14th to eighth and Australia’s Bill Levett has risen three places to ninth on Improvise.

British number one Oliver Townend, fifth after Dressage on MHS King Joules, was last out on course and was going well until he missed his line at the Trout Hatchery. Townend then retired after a run-out at the third element of the Discovery Valley (27), but he is now the best-placed of the home side in 10th place on his first ride, Samuel Thomas.

Blyth Tait (NZL), riding at Burghley for the first time in five years, pronounced himself “rapt” with the former hunter Bear Necessity V. They dropped two places to 11th after negotiating a couple of unplanned long routes, but Tait joked modestly: “If Andrew Nicholson gets 12 time penalties, then 24 is very good for me!”

Olympic reserve Kristina Cook (GBR) was at her very best on Star Witness, despite the horse pulling off a shoe, and is in 12th place, a rise of 32 places after Dressage. They had a nervous moment when the horse tripped in the water at the Trout Hatchery and had to jump the big brush corner out of trot, but Cook never lost her conviction.

“Burghley is always enormous and scary and you have to pick your horse,” said Cook, who works as assistant to her racehorse trainer brother Nick Gifford. “Star Witness is amazing; he’s a Thoroughbred with a pony attitude, and he makes me look fast, which I love.”

Cook described the course as “big and testing” but said the organisers had done “a fantastic job” on the going which other riders reported to have held up well, despite an afternoon of torrential rain.

Fellow Australians Shane Rose, Sonja Johnson and Paul Tapner didn’t have the best of days either. Rose pulled up Shanghai Joe at the Road to Rio double in the main arena (28, 29) and incurred 11 penalties for breaking a frangible device at the Cross Rails (25); Johnson fell from Parkiarrup Illicit Liaison at the Rolex corner (15), and Tapner was taken to hospital for a precautionary check-up after a fall with Up In the Air at the rails at Herbert’s Hollow (22).

Although Christopher Burton is the clear leader going into Sunday’s Jumping phase, and looks set to become the first Australian to win Burghley for 10 years, the cash prizes in the FEI Classics™ are till up for grabs with Tim Price and Mark Todd, in particular, looking to make gains, and riders placed sixth to 10th all within a rail of each other.