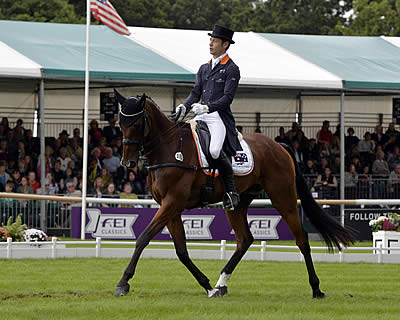 Lausanne (SUI), September 2, 2016 – The stylish Christopher Burton (AUS) is on course to win his first CCI4* on British soil after storming into the lead at the Land Rover Burghley Horse Trials (GBR), final leg of the FEI Classics™ 2015/2016, with a stunning Dressage test on the 17hh Nobilis 18.

He now has 4.3 penalties in hand over first-day leader Bettina Hoy (GER) in a top 10 which, as predicted, is dominated by antipodean flags.

“Nobilis was fantastic and I’m so proud of him,” said Burton of the 11-year-old that was initially produced by last year’s Burghley winner, Michael Jung (GER). The pair has won four of their nine international starts and were second at Blenheim CCI3* (GBR) last year.

“He can be quirky and he got rather lit up at Badminton [where they fell on the Cross-Country], but here he let me ride him and put my leg on. I can’t believe it.”

This time last year, five-time Burghley winner Andrew Nicholson (NZL) was watching on television at home, as he recovered from a broken neck. However, the 55-year-old Kiwi never doubted he would return to top level and now he is back at the event that brings out the best in him, in third place on Nereo, with the excellent mark of 35.2.

Nicholson, 55, has had the Spanish-bred Nereo since a three-year-old. “I think the soft going in the arena perhaps shut his power off a bit, and as he’s a sensitive horse I thought I’d accept it rather than pushing him,” he reported. “Nereo has been one of my favourite horses ever since I got him and I trust him to behave with the crowd and to concentrate.”

Another New Zealander, Caroline Powell, who won Burghley in 2010 on Lenamore, is right up at the sharp end, in fourth place on Onwards and Upwards with the good score of 37.8, and the 2009 winner, Oliver Townend (GBR) is best of the home side on fifth place on MHS King Joules, a horse previously ridden by Andrew Nicholson and Mary King (GBR), on 38.1.

Burton’s Rio team mate Sam Griffiths (AUS) is having his seventh Burghley ride on the 17-year-old Happy Times and is in eighth place on 39.6. “He’s like Roger Federer – he’s quite old but I like to think he’s still got it!” joked Griffiths.

Tait, who has only competed once at Burghley since he first retired from the sport in 2004, was thrilled at the progress made by his mount, an 11-year-old former hunter, following their 13th place at Badminton.

“If Pippa [Funnell] or Bettina had him, he’d probably be better, but we’ve come on together and the horse has exceeded all my expectations,” he said.

“Burghley has always been a happy hunting ground for me. The unique undulations will be influential, and the size of the fences is frightening, but they make you ride well.”

Burton, a dual winner of the Adelaide CCI4* (AUS), wasn’t allowing himself to get too carried away. “I think I’m more terrified than excited. It’s hard to feel confident when you’re facing the Cross Country at Burghley – it doesn’t matter how many times you’ve been here, the Leaf Pit is still huge – but I’m on a blood horse and this place always gets me going.”

Andrew Nicholson considers that Course Designer Mark Phillips, who has produced a “fair and horse-friendly track”, has “got the hang of making the optimum time near impossible”. This means that a thrilling competition is in store, and the heavy rain that is forecast in the middle of the day could change the leaderboard.