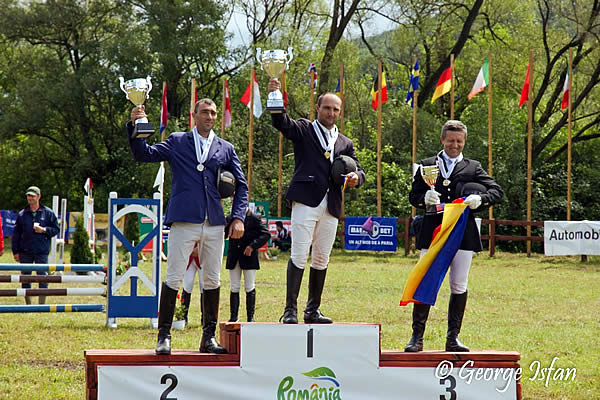 Sighisoara (ROM), 28 May 2013 – It all fell into place for Bulgaria’s Miroslav Iliev who claimed individual gold at the FEI Balkan Eventing Championships 2013 at Sighisoara, Romania last weekend with a stalwart performance riding Lazuren.  At the 2012 fixture staged in Eskisehir, Turkey, his medal chances were shattered by three fences down in the final Jumping phase, leaving fellow-countryman, Ivan Dobrev, to take the title.

But, this time around, Iliev moved into the lead on cross-country day and held on tight, while Dobrev had to settle for silver as the host nation’s Viorel Bubau claimed the bronze.

A total of eight riders from three countries battled it out for the 2013 individual title, and there were no team medals distributed as only two countries – Bulgaria and Turkey – could field a full side.  According to FEI Rules, team medals can only be awarded at Championships of this calibre “if at least three National Federations and/or Regional Teams are represented at the first Horse Inspection”, which did not happen on this occasion.

Sighisoara has strong connections to Vlad lll, Prince of Wallachia, whose fierce reputation inspired Bram Stoker’s vampire character Count Dracula. However the city is better known as a UNESCO World Heritage Site due to the exemplary preservation of the features of a small medieval fortified town. Its tradition of great craftsmanship and its authentic medieval architecture have ensured its important status within the region.

The FEI Balkan Eventing Championships are staged at CCI 1* level, and this year the cross-country course-designer was Ireland’s Andrew Fell while his brother, Peter, was Technical Delegate.

It was Turkey’s Kadir Celik who head the advantage after last Friday’s dressage phase when posting a score of 54.38 with Antalya, but Iliev was competitive from the outset when slotting into second, just over a single penalty point in arrears, followed by fellow-Bulgarian Svetlin Krastanov in third on 56.46 and Dobrev in fourth having registered a mark of 57.50.

Cross-country day began with nice weather but it deteriorated rapidly and developed into an unwelcome storm. The riders carried on regardless however, and three managed to return clear of cross-country time penalties including Romania’s Viorel Bubau and Arcitic who had been lying fifth after dressage and improved to fourth going into the final day.

Meanwhile Celik’s grip on pole position was lost by the addition of 20 cross-country fence penalties, and this allowed Iliev to take the lead ahead of Dobrev when both Bulgarians completed their run across the solid obstacles with nothing to add.  Having collected just two time penalties, Krastanov was lying third as the jumping phase began.  And the bad weather returned to add to the test on the final day, with driving rain during the climax of the competition.

None of the nine riders managed to leave all the coloured poles intact and, with four fences on the floor, Krastanov found himself relegated from a medal position to a frustrating fourth place. Bubau had two down, but that was still good enough to move up and snatch the bronze while Dobrev’s two errors ensured that it would be Iliev’s turn to take the gold when adding just four faults to his tally.  It was an impressive result for the Bulgarians who filled three out of the top four placings at the end of the competition, while all of the nine starters posted a completion score.

The Championship was staged as part of the Transylvania Horse Show, and despite the fact that the action took place in a very remote location outside Sighisoara, almost 2,500 people turned up to witness the excitement on cross-country day.  Event Director for the show is the enthusiastic and energetic Mihnea Gabriel Virgolici, and the fixture was held on his farm which also hosts equestrian holidays and is situated near a village called Prod which is home to just 220 people.

“The remote nature of the area and the pure beauty of it is extraordinary,” TD Peter Fell said afterwards.  “It is very rural, and horses and carts are still part of daily life for many of the people there.  The setting is magnificent; it is in a valley the Carpathian Garden, surrounded by hills topped with trees, and the landscape is completely unspoiled.  It was a pity we didn’t have more teams, because the team competition would have helped to boost the Championships, but we still saw a great competition and Miroslav Iliev’s lovely grey horse, Lazuren, really stood out,” he added.

Catrin Norinder, FEI Eventing and Olympic Director, said she was “really impressed” by the Championships.  “The organising committee did a great job and it is good for the region to have Championships like these.  In the future we hope that more regions, and more countries, will take part so we can further improve the sport in the region,” she added.