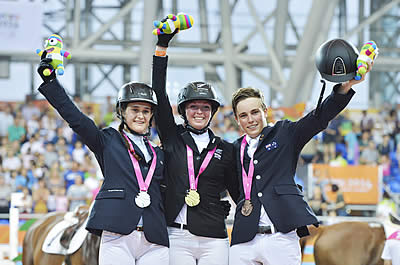 Lausanne (SUI), 5 September 2018 — A total of 30 highly talented equestrian athletes from six continents have earned their tickets to represent their nations at the Youth Olympic Games (YOG) – the world’s largest multi-sport youth event – in Buenos Aires (ARG) next month. And 11 nations will be making their YOG debut.

The athletes, aged between 15 and 18 years, have made the grade after a series of tough global qualifiers, including the FEI World Jumping Challenge series, European and Regional Championships and wider international youth events.

“Representing your country at a young age, at such a prestigious event, is an undeniable honour,” said FEI President Ingmar De Vos. “The YOG is a springboard to the Olympic Games and to the FEI World Equestrian Games. The international equestrian community wishes all our YOG athletes the best for this very important equestrian career stepping stone!”

Every equestrian athlete at the YOG will have the challenge of competing on borrowed horses, which is a major test of earned trust and combined courage.

The athletes will be introduced to their horses, which have been carefully selected by a group of experts in the months running into the Games, for the very first time on 4 October, just four days before the equestrian events start on 8 October.

All athletes will then compete in the Team competition – with a twist – on 8-9 October followed by the Individual competitions on 12-13 October.

“The YOG teams are composed of athletes from the same continent, so this is not just a test of the ability of our athletes to bond with their horses, but also their capacity to bond with each other as they bid for a team medal,” the FEI President explained.

The YOG Equestrian events will be held at the historic Club Hipico Argentino, founded in 1909, and nestled in the Buenos Aires’ Green Park district, famous for its forest and lakes.

The Youth Olympic Games (YOG), which were launched in Singapore 2010, were created to reach out to young athletes worldwide, inspiring young people to take part in sport and adopt and live by the Olympic values.