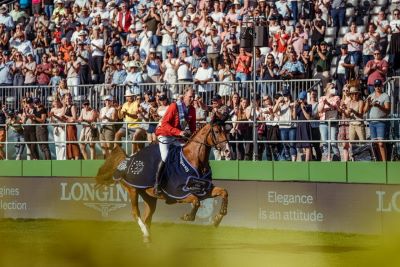 The Longines FEI Jumping Nations Cup™ Final 2021 promises to bring an incredible year of team Jumping to a close this week at the Real Club de Polo in Barcelona, Spain.

Against all the odds in these Covid times, there has been spectacular team sport throughout the summer months, beginning with four thrilling legs of the Division 1 series in which Sweden, Switzerland, Germany, and The Netherlands all tasted success.

Then it was on to the Tokyo 2020 Olympic Games where Sweden pipped Team USA in a nail-biting showdown that went right down to the wire. And that was followed, just four short weeks ago, by the Longines FEI Jumping European Championships in Riesenbeck, German where Switzerland snatched team gold ahead of the hosts.

Barcelona presents the opportunity for some scores to be settled, and the horse/athlete combinations listed in the line-up of the 15 competing nations for the event which kicks off this Friday 1 October, and which runs through to Sunday 3 October, suggests it’s going to be yet another mighty battle at this much-anticipated season-closer.

Once the draw for order-of-go takes place on Thursday (30 September) the stage will be set for this annual clash of the giants of the sport.

Team Ireland arrive as defending champions, but it is two years since they stood on the top step of the podium and also claimed the last remaining qualifying sport for the Tokyo Games.

Darragh Kenny, ranked 12th in the world, is the only member of that 2019 winning side to line out again this year, and he will be joined by Denis Lynch and Michael G Duffy along with his near-namesake Michael Duffy and Eoin McMahon who were in the Irish side at Riesenbeck.

All ten from Division 1 (BEL, FRA, GBR, GER, IRL, ITA, NED, NOR, SWE, SUI) have automatically qualified for the Final this year, but relegation to the EEF series in 2022 is still on the cards for the tenth-placed nation from this group next Sunday, so that piles on extra pressure.

Canada and USA represent North/Central America, and Uzbekistan have earned their slot as clear winners of the 2021 Eurasian League.

The Belgian team includes world number 8, Jerome Guery, who has been showing extraordinary form with Quel de Hus this year, and Gregory Wathelet who finished individually ninth in Tokyo with Nevados S.

Harry Charles, Emily Moffitt, Holly Smith, Jack Whitaker, and his uncle, the legendary John Whitaker, will fly the British flag during the week, while Team France are likely to come out with all guns blazing. They had gold in their sights in Tokyo, but it fell apart in the closing stages, so Matthieu Billot, Frederic Cottard, Marc Dilasser, Penelope Leprevost, and Olivier Robert will be on a mission to put that to rights.

Maikel van der Vleuten, who took individual Olympic bronze in August with Beauville Z, will headline the Dutch selection, while America’s Laura Kraut and Baloutinue, who were so impressive in Tokyo, will also be ones to watch.

Possibly the biggest battle will be waged between the Germans and Swiss.

The hosts of the FEI Jumping European Championships had plenty to celebrate when Andre Thieme clinched the individual title with the fabulous mare DSP Chakaria on the final day. But Steve Guerdat, Martin Fuchs, Bryan Balsiger, and Elian Baumann pinned Germany into silver medal spot in the team competition and there was some banter going on between the two sides during that week.

Switzerland fields the same four athletes this week along with Edwin Smits, but Germany sends out world number one Daniel Deusser together with Thieme, David Will, Christian Ahlmann, and Kendra Claricia Brinkop and they’ll be keen to turn the tables and lift the coveted Longines FEI Jumping Nations Cup™ 2021 trophy.

All teams, consisting of four horse/athlete combinations, will line out in the first round of the Final on Friday night, and those who place ninth and above will go through to Saturday’s Challenge Cup, while the top eight teams will qualify for Sunday’s title-deciding final competition which will begin at 15.00 local time.