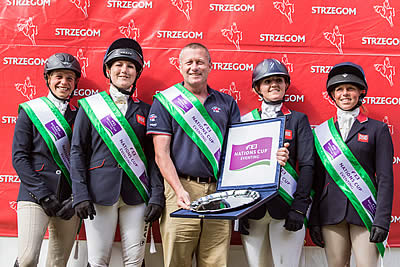 Eight teams contested this leg of the series at the popular Polish venue, which will host the 2017 FEI European Eventing Championships, and many nations will have used this FEI Nations Cup™ Eventing competition to gain experience of Strzegom organiser Marcin Konarski Cross Country track.

The German team, made up of Olympic and European champion Michael Jung, Jörg Kurbel and Falk-Filip-Finn Westerich, led after Dressage with Jung taking the top two places individually. Riding his dual Kentucky CCI4* winner fischerRocana FST and his 2015 European Champion fischerTakinou, he scored the only sub-40 Dressage marks.

Sweden was in second place at this stage, led by Ludwig Svennerstal and King Bob in third place individually, ahead of Team Italy. But there was a considerable shuffling of the leaderboard after Cross Country, which was run in intense heat.

Michael Jung went steadily with both his rides and gained a handful of time-faults on each. Team mates Kurbel (Brookfield de Bouncer) and Westerich (FBW Gina K) had a Cross Country refusal apiece and accrued time-faults, dropping the team to fourth behind Italy and Belgium.

“Strzegom is a fantastic show,” Great Britain’s FEI Nations Cup™ Eventing team manager Philip Surl said. “The Cross Country is as technical a 3* track as you will get and had been tweaked up from last year. It was very well-built and the footing was excellent. I was immensely proud of the Cross Country rounds all four of my riders produced – they absolutely nailed it.”

Six riders jumped clear Cross Country rounds inside the time. Ludwig Svennerstal was faultless on both of his rides – King Bob, with whom he took the lead individually, and Aspe. Juan Carlos Gracia, the experienced Italian rider, also went inside the time on Querfou, as did Karin Donckers (BEL) aboard Grandioz.

The final day’s Jumping phase produced an exciting competition, with fewer than two points separating Great Britain and second-placed Italy. Both Rosalind Canter and Izzy Taylor secured vital clear rounds for Team GBR, while Holly Woodhead and Laura Collett both picked up four faults. None of the Italian riders was clear, allowing Great Britain to win by a comfortable 13.3 points margin.

Italy held on to second, ahead of Belgium in third, with Germany in fourth. Norway – fielding an FEI Nations Cup™ Eventing team for the first time – finished fifth and Switzerland were sixth.

Ludwig Svennerstal (SWE) finished on his Dressage score on King Bob to take individual honours, ahead of Michael Jung (GER) on fischerTakinou and Rosalind Canter (GBR) with Allstar B.