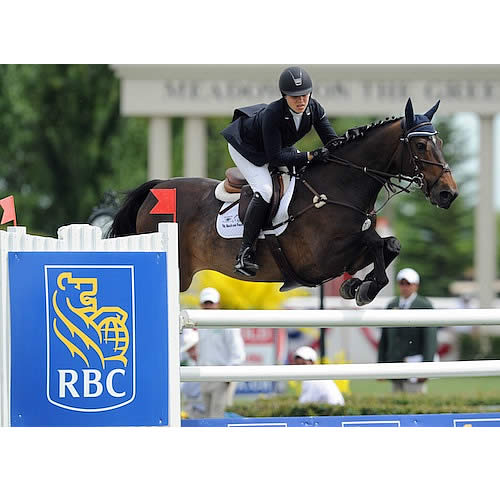 Calgary, AB – June 29, 2013 – The $50,000 RBC Financial Group Cup 1.60m was the highlight event of the day and fans saw Brianne Goutal (USA) ride to victory with her veteran partner Onira. In the All Canada Ring, Shane Sweetnam and Fineman were the only clear round to win the $25,000 Direct Energy Derby 1.45m. Today’s competitions were the start of weekend competition for the ‘Canada One’ Tournament in the Spruce Meadows Summer Tournaments.

The ‘Canada One’ Tournament wraps up tomorrow with the $100,000 Esso Challenge, the third FEI World Cup qualifier to be held at Spruce Meadows this summer. Admission and parking are complimentary for this week.

There were 20 entries in the $50,000 RBC Financial Group Cup 1.60m, and nine were clear in the first round and moved on to the jump-off. The riders competed over a course designed by Michel Vaillancourt of Canada.

Goutal noted, “He’s been building great classes all week. He’s one of my favorite course designers. I find him just to always build difficult and complicated and technical classes, but they’re always fair.”

The trailblazer in the competition was Reed Kessler (USA) on Mika, who was first to go in the first round and in the jump-off. They were clear in 40.69 seconds, which would hold up for fifth place.

Jonathan McCrea (USA) and Colorado had the second fence down for four faults in 44.13 seconds. They would finish in eighth place. Jonathan’s wife, Christine McCrea (USA), was next in on Zerly. They took an early lead with a clear round in 38.73 seconds, but they would have to settle for fourth place at the end of the jump-off. Enrique Gonzalez (MEX) and Quilebo D Tillard had two fences down in 38.15 seconds, which would finish in ninth place.

The lead changed hands with the next horse in, Carlos VHP Z ridden by Nick Dello Joio (USA). They set the new time to beat at 38.61 seconds and they finished in third place. McLain Ward (USA) and Zander had a bead on the lead and finished with the fastest time in the jump-off in 37.21 seconds, but it came at a price with four faults at jump 11a.

Kirsten Coe (USA) and Calypso were the next to bring the winning time down. They galloped through the timers in 38.41 seconds and finished in second place. Jos Verlooy (BEL) and Domino were also clear, but with a slower time of 40.74 seconds, they would slot into sixth place.

It all came down to the last rider in the ring. And although she said she “hates going last,” Brianne Goutal was able to show how it’s done with her 17-year-old partner Onira, a Dutch Warmblood gelding by Nimmerdor x Ramiro Z. They zipped around the turns and stopped the clock in 38.15 seconds for victory.

“The eight before me were very, very fast,” Goutal recalled. “I have a small stride, so it enables me to do the same numbers but faster. I have to go faster to get the same numbers. I think that just up until the last line, I was able to be faster across the ground. In fact, I was slower in the last line because I couldn’t get the leave out. For sure I slowed down there. Kirsten’s horse has a huge stride. What’s unusual about that horse is that even though it’s so big, it has high foot-speed. That’s a hard combination to beat. But you get lucky and my horse jumped amazingly today.”

Onira is owned by Goutal’s Remarkable Farms LP and she has been riding him for 10 years. They have risen through the ranks together from the junior jumpers to the 1.60m level and have competed at the FEI World Cup Finals together.

Goutal is rightfully effusive about her horse. “He’s so special. They broke the mold with him. He’s one of kind,” she expressed. “He’s been a winner since the day I bought him, probably since the day he was born. He has a different attitude than any horse. When you walk in the barn, you can see the way he looks at you. He’s just a different animal. He’s so smart. He knows much better before you know it. (From) an advantage standpoint, he’s the best horse in the class. It’s up to me to help him out or not make mistakes, because I have a major advantage jumping each class with him.”

Goutal said that Onira loves Spruce Meadows and that this was the best consecutive three weeks that he’s jumped here. What also helps the mature gelding is the great footing at Spruce Meadows and the weather. Goutal explained, “Coming here for him is so great because it’s cold at night. You go out there in the morning, the legs are tight, they’re fresh and happy. They’re not sweating all night in the stall. They can recuperate and for a horse like that, and for any horse that gets older, you have such a better horse in the morning.”

To help Onira stay show-ready, Goutal works on his fitness. Three times a week, he is ridden twice a day, and he only shows once a week. “That horse is as fit as any supercharged runner,” she commented. “I struggled a lot with how to manage him. I find that as horses get older, they need to keep jumping and keep the tendons and everything moving. Fitness is imperative. I try to keep him moving as much as possible. Every horse is different, but that horse wants to win, wants to show, wants to jump.”

Goutal has had a good series at Spruce Meadows. She said, “It seems like it’s all coming together now. The horses have all been great. We’re so lucky to have this venue. The footing is amazing every time you go in the ring and even when the weather’s bad, it holds up. We have great prize money and of course, it’s run impeccably. I think all of the riders are very grateful to have this summer series.”

There were 26 entries in the $25,000 Direct Energy Derby 1.45m, but only one was able to find the path to a clear round. Shane Sweetnam (IRL) rode Fineman, a 10-year-old Swedish Warmblood gelding by Feliciano x Beach Boy, to a quick round with no faults in 112.098 seconds. Fineman is owned by Sweetnam’s Sweet Oak Farm and he only started riding him three weeks ago.

With just one time fault, Katie Dinan and Couletto K James placed second in 124.489 seconds. Third place went to Andres Rodriguez (VEN) with Elatrice, who had four faults in 110.516 seconds. The course was designed by Anthony D’Ambrosio and featured 17 numbered obstacles.

Fineman was previously ridden by Sweden’s Maria Gretzer. After arriving in the United States where Sweetnam is based, he and Sweetnam showed in Kentucky, placing third in the grand prix. Sweetnam arrived at Spruce Meadows on Wednesday.

Sweetnam believes this week is also Fineman’s first experiences in the derby competitions. He said, “Maria had him since he was a young horse and did a great job producing him. He’s been very consistent. He’d only done 1.45m before I got him. He’s already done now two grand prix in Kentucky and he placed in both of them, and they were both 1.50m. He’s got a great brain for the job, so it makes life a lot easier for me.”

Fineman easily handled today’s course with fluidity, and although the grob was the second to last obstacle on a long course, Sweetnam was thinking more about the final oxer. “The last fence I was little bit worried about. I think a lot of people struggled with it. It was a big oxer and the horses were tired at that stage and flat. But he jumped it very, very well,” he said.

Sweetnam is aiming Fineman for the $140,000 Cenovus Energy Classic Derby next week. “It’s a different story, but I think he’s a very good horse so hopefully we can have a go at it. He has a lot of ability,” Sweetnam said.

Of his victory, he commented, “It’s great to get a win here early on. Hopefully it will set the tone for the rest of the weeks.”

The ‘Canada One’ Tournament concludes tomorrow with the $33,000 West Canadian Cup 1.50m and the highlight competition of the week, the $100,000 Esso Challenge 1.60 CSI-W in Meadows on the Green. For full results and more information, please visit www.sprucemeadows.com.