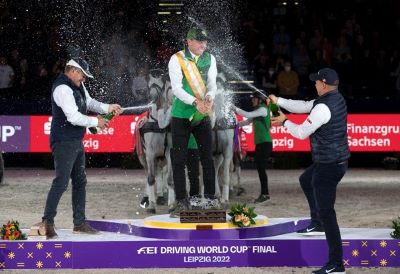 In one of the tightest finals in recent history, Bram Chardon (NED) brilliantly held his nerve and clinched his second FEI Driving World Cup™ title in an exhilarating drive off against reigning champion Boyd Exell (AUS) and Glen Geerts (BEL). After a cat and mouse game of swapping positions between the two favourites, it was the 28-year-old soon-to-be father who triumphed in Leipzig.

“I was a bit disappointed about the two knock-downs and I thought I gave Boyd too much room to win. After Friday I was so confident and to have the two faults made me worry a little bit about my final position, but this is amazing and I am so happy!” said Chardon.

After the first round, held late on Friday night in the Leipziger Messe arena, Bram was ahead of Boyd by just under 8 seconds, so started Sunday’s second round on zero. Each driver carried over 50% of the difference between their score and Bram’s going into the final day and as the tension mounted, Boyd, with a penalty score of 3.78, stated, “It’s less than one ball down between us!”

Former champion Koos de Ronde (NED) was the first to drive Jeroen Houterman’s (NED) twisting course, the route unchanged since Friday but the position of some of the obstacles slightly altered. Koos had paid the price for his attacking approach on Friday, clocking up a penalty of 18.99 to carry forward. Back on his usual smooth form, he only nudged one ball, and in a time of 143.19 finished fifth on 166.18.  Next in was Mareike Harm (GER), the first female to compete in an indoor FEI Driving final. Her horses, who she also drives at outdoor events, were off pace in 155.51 and with one ball off, plus a penalty of 14.05, she dropped to seventh on 173.56.

Wild card driver Michael Brauchle (GER), who had set a competitive time on Friday, rolled three balls to add to his time of 144.22, plus a penalty of 10.57 to finish sixth on 166.79.  As the fourth starter, Glen Geerts (BEL) carried over 10.27 but drove a fantastic clear and finished on 148.89 to put himself into the final three. Belgian teammate Dries Degrieck, in his first FEI indoor season, dropped out of contention for the drive off with an unlucky ball on the final obstacle number 13, which cost him the valuable place as he finished behind Glen on 159.68.

As the intensity in the arena grew, Boyd pulled off one of the best rounds of the competition to close the gap between him and Bram. Leaving all the balls on top, he clocked up a time of 132.42, which plus his penalty put him on 136.2.

Admitting that he was extremely nervous, Bram drew on all his experience and matchplay to drive an even faster time of 132.33 but knocking one ball, finished on 136.33, which flipped the order and put Boyd into first place ahead of the drive off between the best three.

The enthusiastic crowd got behind the drivers and increased the already electrifying atmosphere, clapping to the beat of the music. First in was Glen, with his big outdoor horses, who he says are 1.5m longer and up to 20cm higher than the other teams. Having not considered that he would be in the drive off, he said after that he hadn’t thought about the different routes in obstacles 5 & 9 when two gates were taken out. While in 5, he knocked cone 6, so the clock was stopped and he was given an additional 10 penalties. He started again, having taken the foot off the pace, and with another ball down, ended his competition in third place on 323.73.

Bram re-entered the arena and rising to the challenge, produced another exceptional round in 118.39, knocking one ball. But he had done enough to really apply the pressure to Boyd.

All eyes were on the Australian, who was aiming to take his tenth indoor title, and he began in convincing style with all those watching believing that he would retain his title. Yet everyone gasped as right at the end, his horses lost balance between the final two obstacles and he hit cone two, rolling the ball, which crowned Bram World Champion.

In a rousing gesture during the prizegiving, the loudest cheer went to Bram’s proud father, the legendary Ijsbrand Chardon, multiple champion, who came in to hold the reins while Bram took to the podium. After receiving their prizes, champagne was sprayed around then the three drivers performed their famous ‘showboat’ before Bram was left alone to absorb the cheers from an adoring audience and exit at the gallop with his stunning grey horses wearing their new, red winners’ rugs.

Still grinning at the press conference, Bram commented that it was fantastic to have Mareike in the final, and he hoped it went to prove that driving a four-in-hand wasn’t all about strength, but as much about the training and getting the equipment right.

A fitting finale to a fantastic competition, after a much-shortened season, the drivers are now looking towards the outdoor event at Kronenberg (NED). All being well, we can look forward to a full programme of FEI Driving World Cup™ events for the 2022-23 season and much more excitement in this riveting contest between the world’s very best.