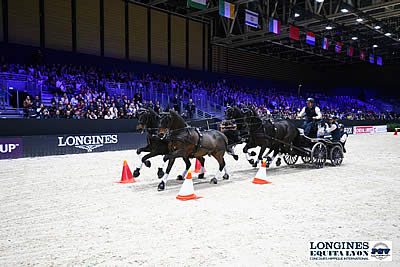 The 2019/2020 season of the FEI Driving World Cup has begun. The very best drivers got together at Longines Equita Lyon, Concours Hippique International for this first four-horse indoor driving meeting. At the end of a drive-off reserved for the three best teams from the first round, Boyd Exell – the world number one and a true legend in the discipline – won the event with a masterful performance. The Australian combined speed and precision in this spectacular class. He won the event in a time of 142”70, with second place going to the young and promising Dutchman Bram Chardon (26) – who won the FEI World Cup Driving Final last year – in a time of 148”99. Third place went to the Hungarian József Dobrovitz in 173”14.

Leading their four horses with their guiding reins and the sound of their voices, the drivers demonstrated the full potential of their horses and the true teamwork achieved with their grooms. “We had a great day of sport. I competed for a long time against Ijsbrand Chardon. Today, it is his son Bram who has taken over. He is a great competitor and improving each year. It’s great for our discipline: it pushes everyone to get better and it will take elite driving to a new level,” said Boyd Exell, four-time world champion and seven-time FEI World Cup Final winner. The Boyd Exell/Bram Chardon duel has truly started. “This time it was Boyd’s turn to win. Next time, it’ll be mine!” said the young Dutchman, with a smile.

Benjamin Aillaud represented France at the event, with four new horses. “I have gone back to my first love by assembling a new team of Lipizzan horses. The objective is to really make a mark in indoor driving with these horses,” said the Frenchman, who was seventh in the event.

Part of the Longines Equita Lyon, Concours Hippique International for the second year in a row, four-horse indoor driving was once again a great success on the last day of the show. “We are very proud to host this discipline in Lyon. The audience is really starting to enjoy the discipline. I am really pleased that the best drivers in the world come to compete here;” said Sylvie Robert, President of GL events Equestrian Sport, before adding: “This year’s Equita Lyon attracted a record number of visitors. All the people involved contributed to making this year’s show a success.” 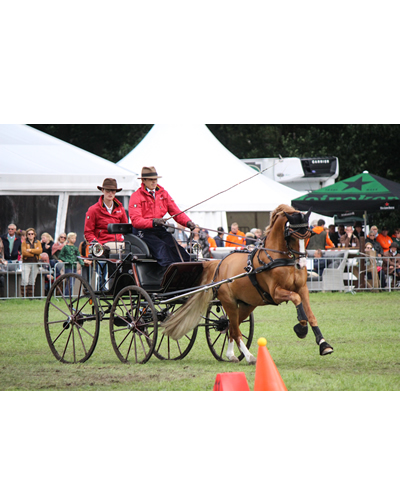 A total of 87 competitors from 16 nations fought for the honours at the Prinsenhoeve Estate, venue for the Outdoor Brabant Horse Show, with eight teams battling it out in the nations competition. It was the first time in the history of pony driving that the World Championships had been held in the Netherlands, but the choice of Breda was a natural one as this venue hosted the first ever FEI European Championships for pony four-in-hands in 1995.

Unfortunately, heavy rain showers battered the competition site from the start, which affected the footing in the dressage arena as well as the marathon phases and the obstacles.

New team format
It was the first time that the nations teams were composed differently compared to the previous World Pony Driving Championships. According to the new rules, a Nations Team is composed of 2-3 singles, 2-3 pairs, and 1-2 four-in-hands. The scores per phase of the two best singles, two pairs and one four-in-hand counts towards the team result.

Singles
Fabian Gänshirt (GER), 26, finished fifth in dressage and third in the very heavy marathon to take the lead in the standings after the first two disciplines. In the final obstacle driving competition he had just a handful of time penalties and was absolutely thrilled to secure gold at his first ever World Championship.

Gänshirt, who won the CAIO Minden this year with his eight-year-old German riding pony David L, was very happy: “The dressage went okay for me, but I know my pony can do better,” he said. “The atmosphere in Breda was different and caused some tension with my pony. In the marathon I started quite modest but after obstacle one went well, I started driving and fully went for it which resulted in fast times.”

He felt the pressure before he went into the cones arena after Martin Hölle drove clear: “I said to myself, ‘stay cool’! This pony is unbelievable; this is only the second year that I drive him and the first season that we compete at this level.”

The silver medal went to defending World Champion Martin Hölle (HUN), who competed with his World Championship pony Apache de la Licorne. Hölle won the dressage but dropped to second after the marathon in the day-long heavy rain showers.

The 18-year-old student really went for it in the cones: “I came here for first place, so in the cones I felt I had nothing to lose, only something to win.” Hölle is planning to compete with a horse pair from next season but he will go on competing in the single pony class at the same time so that he can compete again in the 2017 FEI World Pony Driving Championships.

Second German team member Katja Helpertz took home the bronze medal, driving her New Forest pony Nordstern´s Stoertebecker. The 23-year-old law student moved up to the third place in the standings after finishing second in the marathon. Both Hölle and Helpertz are trained by Dutch trainers.

Pairs
After winning bronze at the previous World Championships in Pau 2013, Anna Grayston (GBR) was finally able to finish the job in Breda and was crowned World Champion in the Pony Pairs. Grayston finished second in dressage and moved into the lead after the marathon. After second placed driver Christof Weihe (GER) left the cones arena with over 20 penalty points, Grayston, a 43-year-old carriage driving coach, had more than 15 penalty points advantage over her opponents. She knocked two balls down and had time penalties, but she wasn’t sure where she had ended up when she finished and only realised she’d won when the speaker announced it.

“I didn’t know how much I had in hand so I only knew that I had won when I came out of the arena!” she said.

Grayston used the same ponies in her dressage pair as at the 2009 World Championships in Greven (GER) and used one of the leaders of her pony team which she drove at the 2005 World Championships in Catton (GBR): “I haven’t used this dressage pair in Lipica or Pau. I decided to use them again because the judges like bigger paces in dressage. I sold my leader pony from Catton to one of my grooms and I got it back in February. I use it just for the marathon and with getting the pony back, I also got my groom back as back stepper in the marathon!”

Dressage winner Jan-Felix Pfeffer (GER) dropped to fourth place after the marathon but as his compatriot Weihe had too many faults in the cones, the German Vice-Champion 2014 and 2015 moved up to take silver. Austria’s Stefan Bösch finished second in the marathon and moved up to bronze before the cones, holding onto the medal despite one knockdown.

Four-in-hands
Bram Chardon (NED) left no room for his opponents in Breda, with the 22-year-old winning all three phases of the competition to claim his third consecutive individual gold medal. Chardon junior started well in the dressage despite the heavy footing. In the marathon he felt the breath of second placed Steffen Brauchle (GER) on his neck and decided to go for it: “I saw Brauchle in obstacle one; he took the short route and went so fast that I decided to go for it from the beginning,” Chardon said. “I had Aachen still fresh in my memory where my father IJsbrand lost it in the marathon to Steffen’s brother Michael and I didn’t want that to happen to me!”

After dressage and marathon, Chardon junior had an advantage of over 23 penalty points to Brauchle, so he could take it easy, but he proved his professionalism and finished the job by putting down the only double clear round of his class, driving the same grey Welsh ponies as when he won the title in Pau (FRA) in 2013.

Steffen Brauchle was the deserved silver medalist, finishing second in dressage and third in the marathon with his German riding ponies. The Belgian 21-year-old Nathan Nijs took the bronze medal after finishing second in the marathon, which he could have won but for a hiccup in the last obstacle. After dressage, in which he drove his home-produced carriage, and marathon, Nijs was in third place and held on despite two knockdowns and some time penalties.