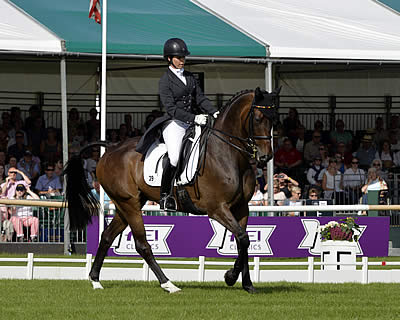 Lausanne (SUI), September 1, 2016 – Bettina Hoy (GER) lit up the arena on day one of the Land Rover Burghley Horse Trials (GBR), final leg of the FEI Classics™ 2015/2016, with a beautifully executed Dressage test on Designer 10 that was in a class of its own and may prove hard to beat.

The only fault in a show-stopping exhibition of lightness, smoothness and balance seemed to be a bit of tension in a flying change, and, with a score of 34.5, Hoy has a comfortable eight-penalty margin over Bill Levett (AUS) on Improvise after the first day of Dressage.

The experienced German rider’s illustrious career stretches back to the 1984 Olympics and she took the European title at Burghley in 1997 on Watermill Stream. Hoy, 53, is a popular and familiar face on the British circuit, but she has never won a CCI4* here, her best result being fifth at Badminton this year on Designer 10.

“I think Designer must have been having a little chat with [my other horse] Seigneur Medicott, who usually does the better test, as he felt great in there,” said an elated Hoy. “I’ve developed a special programme for him in the warm-up because he can get a bit tense. Every time I feel him tighten, I go into rising trot and that helps.”

Hoy reported that she had been working hard with her trainer, Sebastian Langehanenberg, as her 12-year-old Westphalian gelding by Dali X “is not built for dressage”. He had suggested changing from a snaffle bit to a double bridle because having two bits in his mouth seemed to settle the horse.

Hoy added: “I’m feeling very motivated after Rio [where she was training a Russian rider]. Burghley holds a special place in my heart and, although it won’t be a dressage competition, I know Designer can do it.”

Levett, also 53, has been based on Britain for many years and has been getting closer to CCI4* success all the time. He re-routed Improvise to Luhmühlen, where the horse finished 13th, after an early retirement at Badminton in May.

Paul Sims, 31, a relative newcomer to this level, finds himself the best British rider at this stage, having scored his best CCI4* dressage result on the white-faced Glengarnock to lie third on 46.6. This is their third Burghley, having finished 25th last year. Sims admitted to feeling quite confident: “He’s a reliable cross-country horse, as long as I don’t make any mistakes.”

Burghley first-timer Elisa Wallace’s (USA) campaign got off to a good start when she scored 46.8 on the American Thoroughbred Simply Priceless for fourth place at this stage. “He can be quite tense so it’s been a huge journey to get him to be expressive,” she said. “When I looked up at the scoreboard and saw the score, I couldn’t believe it.”

Hoy’s main challengers Friday look to be New Zealanders Sir Mark Todd (NZB Campino) and Andrew Nicholson (Nereo), who have 10 Burghley wins between them, plus the Dressage leader in Rio, Christopher Burton (AUS) on Nobilis 18 and his team mate Sam Griffiths on the veteran Happy Times.