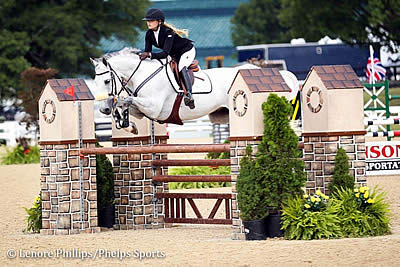 Duvin, 16, of Cincinnati, Ohio, performed a double-clear effort on her 12-year-old Holsteiner gelding King Chacco, crossing the finish line in 33.127 seconds during the jump-off. Isabel Harbour placed a close second in the class on Fit to Print Farm’s 15-year-old Brandenburger gelding, Camera Ready, after jumping double-clear and finishing the jump-off in 33.961 seconds.

Following the Children’s Jumper Classic, the adults took over the Rolex Stadium at the Kentucky Horse Park. Gomez, originally from Colombia, went double-clear and raced to the finish in 33.464 seconds on his 11-year-old Warmblood gelding, Dallas De La Bonnett. The lifelong equestrian balances his riding with his career as an equine veterinarian and has been affiliated with Palm Beach Equine Clinic since 2011. He has represented the clinic at prestigious events around the world such as the 2012 Olympic Games in London, England, the 2015 Pan American Games in Toronto, Canada, the 2014 World Equestrian Games in Normandy, France, and the 2016 Olympic Games in Rio de Janeiro, Brazil. Along with taking home top honors in the classic, Gomez also topped the Adult Jumper division and was awarded the championship title.

Samantha Hill rode Attack, a 17-year-old Belgian Warmblood owned by Andrea Simpson, to second place with a double-clear time of 31.123 seconds. The riders who won Sunday’s classics are now qualified to compete in the same division at the Washington International Horse Show as well as the NAL finals that will take place at the Pennsylvania National Horse Show this fall.

Small, medium, and large ponies took over the hunter rings to compete for the sought-after Grand Pony Hunter Championship on Sunday at the Kentucky Summer Classic. Adam Edgar saved the best for last, winning the final pony hunter class of the day, the Large Pony B Hunters, aboard Fox Creek’s Antony Quinn, a 13-year-old German Riding Pony gelding owned by Dianna Orona. The pair also earned the Grand Pony Hunter Championship title in the Stonelea Ring.

The 18-year-old from Leesburg, Virginia dabbled in a handful of different sports throughout his childhood, but was inspired to try riding because his mother grew up with horses. Ever since, he was hooked and has been finding success in the hunter, jumper and equitation rings. Edgar trains with Bill Schaub as well as Ken and Emily Smith of Ashland Farms.

During the Large Pony B Hunter division, Edgar and Fox Creek’s Antony Quinn won the handy, undersaddle and one over fences class, and the pair placed second in the other over fences.