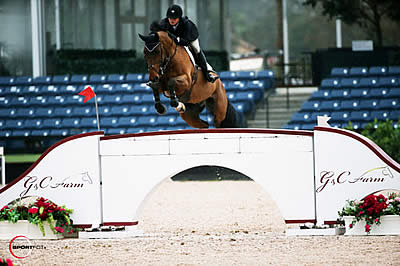 Eric Hasbrouck is the course designer in the International Arena at PBIEC for week one competition. Hasbrouck saw 20 competitors over his $8,000 G&C Farm 1.45m speed track in the morning with seven clear rounds. Adrienne Sternlicht and Quidam MB secured the win with their time of 66.192 seconds. Shane Sweetnam (IRL) and Spy Coast Farm LLC’s Baldev finished second with their time of 67.670 seconds. Lauren Hough (USA) and Reconnaissance, owned by Laura and Meredith Mateo, went first in the class and set the pace with their time of 68.575 seconds and eventually finished third. Jimmy Torano (USA) and Ben Maher’s Dolores MB had the fourth place time of 69.997 seconds.

Adrienne Sternlicht has owned Quidam MB, a nine-year-old Oldenburg gelding by Quidam’s Rubin x Argentinus, for two years now. The pair started in the Low Amateur-Owner Jumpers and then moved up to the High division last year. They have now taken the next step, and started off the 2014 FTI WEF circuit with an exciting 1.45m win. They also topped the High Junior/Amateur-Owner Jumper Classic at last week’s Holiday Finale horse show.

“I got down here last week and he showed Saturday in the Highs and won that class and then today he was fantastic,” Sternlicht noted. “It is really exciting (to win the first class). I was hurt last season, so we are really starting out on a good note. I didn’t ride that much in high school, but now I get to practice a lot. Now it is really about setting the right pace for me, so it is a great start.”

Sternlicht trains with Linda Langmeier as well as U.S. Olympic Team Gold Medalist Laura Kraut. She was very excited to win Wednesday’s class over many top international riders, including Kraut.

“It is fantastic,” Sternlicht smiled. “I am definitely an amateur rider. I am just starting to move up and be competitive at this level, and I have started to get a bit of experience at the grand prix level. I sit and watch everything, even when I’m not here. I can learn a lot from watching the riders in the schooling area as well.”

Sternlicht had the advantage of watching the top rounds before her on Wednesday and was able to plan her ride a little bit. She took note of what Shane Sweetnam had done, as he was leading the class before her round.

“I really just tried to think about the right pace from jump one to two so that he didn’t get too hung up at two, and then just carrying a fluid pace throughout the round,” Sternlicht explained. “I wasn’t necessarily focused on winning, but he went in and was so good at the start, so I just kind of kept going. We were wondering whether to do six or seven strides in the last line and he has such a big stride and tends to drift right, but the six really just kind of honed in on itself. That is really what I took from watching Shane’s ride.”

Speaking more about Quidam MB, Sternlicht stated, “He just turned nine, and we are finally starting to call on him, so I’m really excited. He is a really special horse. He is very careful and has a huge stride, so I tend to worry about less things on him and just kind of let him do his job.”

Sternlicht hopes to move up to some bigger classes with Quidam MB during this year’s FTI WEF circuit. She will also compete with some of her more seasoned horses, such as S&L Slingback. She will compete during the first few weeks of FTI WEF and then commute back and forth between school (she is a Sophomore at Brown University). Sternlicht began showing in Wellington at a young age and has seen the show grow a lot. She looks forward to a great season.

“I did a lot of ponies and then took a break in high school, but I have been coming here for probably about ten years and the facility keeps getting better,” the rider acknowledged. “It is really remarkable, and my horses are all really happy, so we are very happy to be here.”

The $6,000 Spy Coast Farm 1.40m speed was the final class of the day with a win for Sweden’s Alexander Zetterman aboard Canora. The class featured 37 horse and rider combinations with seven clear rounds. Zetterman and Canora finished in 60.181 seconds, well ahead of second place finishers Larua Chapot and Bradberry in 65.012 seconds. Hayley Barnhill and Cara Cheska’s Zephire placed third in 73.34 seconds.

FTI WEF week one, sponsored by The Mar-a-Lago Club, will continue on Thursday with the $25,000 Ruby et Violette WEF Challenge Cup Round 1. The first hunter champions of the circuit will also be named. For full results, please visit www.showgroundslive.com.