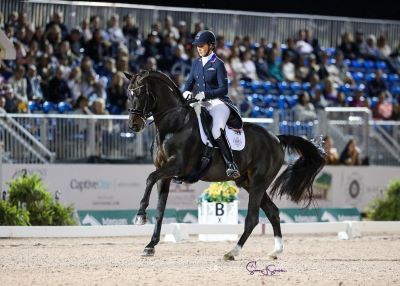 It was a new career high for the pair, who were on the silver medal-winning U.S. team at the Tokyo Olympics, and the highest score ever recorded in the history of the AGDF. The previous highest of 84.975% was set by Laura Graves (USA) and Verdades in March 2018.

The ride came just a day after Lyle and Salvino, Betsy Juliano LLC’s 15-year-old stallion by Sandro Hit, posted the highest Grand Prix score by any American combination since last year’s Olympic Games. In second place came another stallion and another personal best: Sarah Tubman (USA) rode First Apple, Summit Farm’s 12-year-old by Vivaldi to 78.205%. Brittany Fraser-Beaulieu and All In — who represented Canada in Tokyo — filled third with 77.01%.

Lyle, who scored two tens for piaffe and another for music, said: “It was hands down the best feeling I’ve ever had in the ring in my life. Salvino just feels unbelievable. This is such a fun place to show. The crowd’s amazing and enthusiastic. The competition was super tonight; it was a magical evening.”

Tubman heard the crowd clapping along on her final center line and was reduced to happy tears about her performance with First Apple.

“That’s an amazing feeling,” said the 33-year-old Tubman, who rode First Apple to individual gold and team silver medals with the U.S. Dressage team at the 2019 Pan American Games. “I haven’t shown at that many other places, but this is pretty addicting, and it’s really fun. We all work really hard, so it’s so cool to have the crowd help you, and to be [on the podium] with two Olympians.”

Fraser-Beaulieu, who is pregnant and due in August, was delighted with her own 17-year-old All In.

“He loves his job, and it seems like the older he gets, the more he loves it,” she said. “He keeps getting hotter, actually, not lazier. But every time he goes into the ring, he tries his best for me, and tonight I really enjoyed my freestyle. I thought in general his piaffe was so much better than it has been in the last few years.”