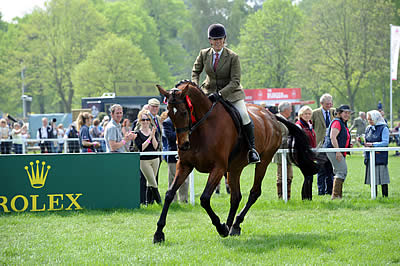 Katie Jerram and Her Majesty The Queen’s Barber’s Shop.

Despite Wednesday’s cancellation, Royal Windsor Horse Show set off in style with packed crowds enjoying the sunshine, the top equestrian sport and the displays. Her Majesty The Queen was delighted to win first place in the RoR Tattersalls Thoroughbred Ridden Show Horse Championship, with her prized homebred Barber’s Shop.

The main national show jumping class of the day was the 1.40m Grade A & B two phase competition, which proved to be a challenging course, with only four of the 30 starters jumping a double clear round. Fourth to go, Tim Stockdale, set the early pace, jumping a double clear in a time of 29.85 seconds to finish eventual third; however, it was Philip Miller aboard Unbelievable Lady who claimed the £1,200 winner’s prize. The chestnut mare, by Unbelievable Darco, jumped an immaculate round to secure victory, knocking 1.78 seconds off runner-up Trevor Breen’s time.

Further winners on the day were Katie Meredith and Zoralyn, who took the Land Rover Grades B & C Handicap from Nicola Wilson and Maja Burnell who galloped to victory in the opening International CSI-Am competition of the show riding the nine-year-old Crona Cr. The other jumping class of the day was the Olympic Star Spotters for six-year-olds, which saw 12 riders jump double clear to share equal first place.

28 horse four-in-hands from eight nations competed in the first leg of the Land Rover International Driving Grand Prix – the dressage. First place after this phase, and by a significant margin, is the current World Champion, Boyd Exell from Australia. His closest challengers are the three members of the gold medal winning Netherlands team at WEG two years ago – Ijsbrand Chardon, Theo Timmerman and Koos de Ronde. The winner of the last two years, Chester Weber from the USA, had to be content with fifth position as he prepares for the second phase, the cross-country marathon.

Exell, who is driving a team of mixed KWPN horses of varying experience, has a lead of some 7-penalties over the rest of the field; the next four contenders are bunched close together, separated by just two penalties. With Exell and Chardon, both multiple winners here over the years, keen to reclaim the title, Weber on his mettle to retain it and Timmerman and de Ronde looking to take it for the first time, Saturday’s marathon promises outstanding sport and great excitement.

The Leeman Family was compensated for their aborted journey Wednesday, when their homebred two-year-old filly, Kellythorpes Spot The Difference, made her show ring debut to take the In Hand Coloured Championship. It was also co-producer Janay Leeman’s birthday and rider Frazer Atherden’s parents’ wedding anniversary.

The Show will take place from 11-15 May 2016. Over 50,000 visitors are expected to attend the 74th year of Royal Windsor Horse Show which offers its audience astounding displays in the main Castle Arena, such as the DAKS Pony Club Mounted Games and The Shetland Pony Grand National. As well as the equestrian competitions and activities, there are over 220 shops in the Shopping Village, with a wide range of goods for sale, from jewellery and fashion, to food and drink. Her Majesty The Queen has attended every year since the Show started in 1943 and it is the only time of the year that the private grounds of Windsor Castle are open to the public. Royal Windsor Horse Show is organised by Windsor Equestrian Promotions Ltd, a part of HPower Group, also organisers of Olympia, The London International Horse Show www.hpower.co.uk.