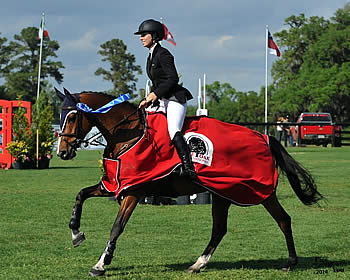 Ocala, FL (March 23, 2014) – Poise, precision and power landed Catherine Pasmore of White Hall, VA and Pasmore Stables, LLC’s Z Canta at the top of the John Deere stadium leader board in the $33,000 CSI2* Hollow Creek Winning Round on the final day of competition at the 2014 Live Oak International in Ocala, FL.

Pasmore topped a field of 32 contenders including U.S. Olympic veteran ‘Leapin’ Leslie’ Howard, of Darien, CT, whose fault-free effort on The Utah Group’s Utah over Leopoldo Palacios’ course was close (55.55 seconds) but not enough to catch Pasmore’s own flawless effort of 54.62 seconds.

The final fault-free round belonged to Andre Thieme of Plau Am See, PA, and Conthendrix, with a gallop through the timers at 56.25 seconds.

This marked the second year that Hollow Creek Farm sponsored Sunday afternoon’s premier show jumping class.  Having attended the inaugural Live Oak International show jumping event in 2012, business partners Andrea King and Angel Karolyi of Hollow Creek Farm in Aiken, SC, were anxious to lend their support.  In 2013, they stepped up to sponsor the Winning Round competition and committed to do so again this year.

“Live Oak is, without a doubt, the prettiest farm in the state of Florida,” said Angel Karolyi of Hollow Creek Farm. “We really appreciate that the Weber family has opened its doors and invited the show jumping community to come to Live Oak.  They’ve done a great job, with wonderful footing, and a really nice, well-run event.  It’s a special venue, of which there are very few in this sport, and we were excited to be a part of it again this year.”

At the conclusion of the show jumping, the luck of the Irish was with Live Oak International $10,000 E2 Leading Rider Award winner and 2012 Olympic Individual Bronze medalist, Cian O’Connor.

Live Oak Plantation’s incredible atmosphere, world-class facilities, and top-of-the-line competitors once again came together to create the country’s premier driving and showjumping event. Managed and organized by the brother/sister team of Chester Weber and Juliet W. Reid, the 2014 Live Oak International continues to set the standard for competition, entertainment, and equestrian sport in the United States.

For more information on Live Oak International, including a full schedule of events, visit their website at www.liveoakinternational.com.