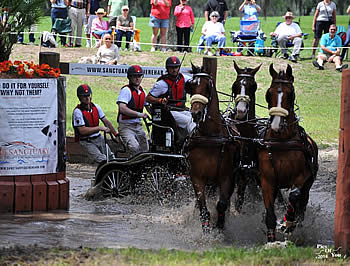 Chester Weber and his team on course in the marathon. (Photo courtesy of PicsofYou.com)

Ocala, FL (March 23, 2014) – The motto on its show program, Chase Perfection, Catch Excellence, perfectly encapsulated this year’s Live Oak International, March 20-23, at Live Oak Plantation in Ocala, FL, as history was made in U.S. National Four-in-Hand competition, Olympic Show Jumping champions converged, and Super Bowl stars of both the commercial TV screen and stadium met in one superlative week of competition in front of a record 10,000 fans.

Writing yet another chapter in American combined driving history, Chester Weber of Ocala, FL, defended his U.S. Four-in-Hand Horse title with a record 11th victory on a final score of 116.33, also accepting the Jean Keathley Award sponsored by Michael Freund for lowest dressage score by an FEI whip.  Second place went to Sarasota, FL whip Misdee Wrigley-Miller, who accepted the Anne Bliss Memorial Award sponsored by Michael Freund as the most elegant lady driver throughout the competition.

After four classes of show jumping competition, the luck of the Irish in the $10,000 E2 Leading Rider Award went to 2012 Olympic Individual Bronze medalist Cian O’Connor.

Super Bowl sports star power was apparent in a double dose at Live Oak International. The 6’5” two-time National Football League Super Bowl linebacker Max Montoya of Hebron, KY, known and loved for his signature lime-green ‘fauxhawk’ helmet, was large and in charge as he drove to the top of the Intermediate Pair Horse championship with his Georgian Grandes.  Also drawing thousands of fans and rightly winning applause throughout the week were the world famous stars of the Super Bowl television commercials, the Budweiser Clydesdales.

While the big boys had star power some of the littlest riders stole the show on Sunday when a small herd of small riders entered the ring for the leadline class to resounding applause.  Special thanks to sponsors Sleepy P Ranch.

Demonstrating that driving horses (or ponies) isn’t just for the gentleman was Misdee Wrigley-Miller of Sarasota, FL, the reserve champion in the U.S. National Four-in-Hand and winner of the Anne Bliss Memorial award as the most elegant lady driver of the event. Wrigley-Miller, who drove her first pony at age four, was adamant that combined driving was not about muscle, but finesse and saw her reserve championship as an a opportunity to serve as a role model for younger equestriennes.

Ten thousand spectators and 17 nations added up to a winning equation for Live Oak International organizers and brother-sister team, Chester Weber and Juliet Reid.  Weber intimated that there is still more to come, with plans in 2015 of expanding the program to embrace Three-Day Eventing, too.

“I foresee Live Oak International as America’s Aachen,” Weber said, comparing the goals of the Ocala venue to the esteemed European venue.