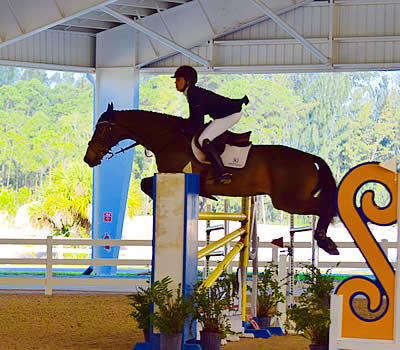 Wellington, Florida (April 11, 2016) – As the final horse soared over the final oxer under the spectacular covered arena of Jim Brandon Equestrian Center, the 2016 turf Tour came to a close following 13 weeks of high caliber show jumping and hunter competition. Finale week at the Turf Tour included some of the most technical courses, exceptional amenities, and world-class competitors that have set the series apart on the Wellington show circuit.

The $24,995 Turf Tour Finale Grand Prix was topped by Brianne Goutal aboard Onira, one of a group of early double clears that bested the field of riders including Olympic champions and some of the top names in international show jumping. Hardin Towell and Flip clocked in at 35.286 in the jump off to place second, and Goutal and her other ride, Barlon van Groenhove, finished third with a double clear and 36.588. Subsequent double clear efforts were achieved by Olympic Gold Medalist Ben Maher and Jane Clark’s Tic Tac, top ranked Asian show jumper Taizo Sugitani and Hyperion Stud’s Imhotep, New Zealand’s Sharn Wordley with Hickstead’s Axel and Zabel D, and Chilean Olympian Samuel Parot with Cortina 186 and Cous Cous Van Orti.

Because of the threat of inclement weather, Wednesday’s competition was rescheduled for Thursday at Jim Brandon Equestrian Center. The two 1.30-1.35m divisions were topped by New Zealand’s Sharn Wordley and Ireland’s Denis Coakley. Wordley, who finished second in the CSI 5* at WEF and only began showing on the Turf Tour later in the season, has been riding the 11-year-old gelding Hickstead’s Axel for 5 years and aimed to boost his position on the FEI rankings. “The horse is a solid competitor, and I’ve also brought some young horses to get the experience,” said Wordley. “The Turf Tour is a great opportunity for both the horses and riders and I’m a huge supporter of it. It’s also a great chance to win great prize money.”

Canadian Olympian Beth Underhill, a frequent face on the Turf Tour, was also frequently in the ribbons aboard her string of horses, so much so that she topped the overall standings. Her achievements earned her the Leading Rider and Leading Lady Rider awards, which were inaugurated on the Turf Tour this year in memory of Sophie Walker and Andres Rodriquez, to equestrians lost tragically just before the start of the 2016 season. Underhill, who recently rode Count Me In to victory in the Week 10 Grand Prix at the International Polo Club was thrilled with the honor and her horses’ performance over the past three months. “It was wonderful to have the horses be so consistent throughout the circuit,” said Underhill. “And it wasn’t just one horse that stood out, but all of my horses jumped great. Count Me In really found is stride and I’m so thrilled for him and his owner Sandy Lupton. I’m expecting him to develop into a national Grand Prix horse in Canada, and I’m looking forward to build on the experience he has gained here for the winter. It’s an honor to be awarded the leading rider awards, and am looking forward to 2017.”

With the goal of developing young horses and advancing riders, the Turf Tour 13-week is a unique addition to Wellington’s growing winter circuit, offering riders top-tier competition, over $400,000 in prize money, and an unparalleled atmosphere. The ‘show when you like,’ open-ended schedule offers convenience and a more distilled competitive environment, without sacrificing the challenge and competition found at nationally recognized shows. Organized by Olympic show jumper Nona Garson, George D’Ambrosio, and Craig Bergman, the vision that inspired the tour’s conception was bringing back the old world flair to jumper classes by staging competitions on springy, natural turf surfaces away from the chaotic intensity of other show grounds.

Due to popular demand, The Ridge also hosted a final schooling show, an addition to the schedule, on April 2-3, 2016 at The Ridge at Wellington. Featuring the same prizelist and schedule as previous shows, the series featured hunters and equitation on Saturday and Jumpers on Sunday.