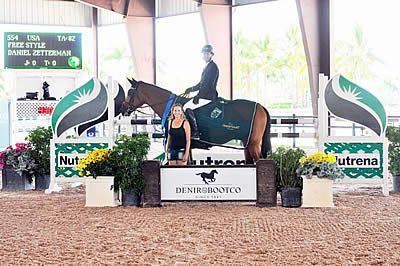 Wellington, FL – August 28, 2018 – Equestrian Sport Productions (ESP) Summer III saw Daniel Zetterman of Lake Worth, FL take first place in the highlight class of the weekend, the $5,000 DeNiroBootCo Stakes class aboard Free Style, owned by Keren Halperin-Guy, flying through the timers with a fault-free victory. The class welcomed twenty-two horse and rider pairs to challenge the track, and Zetterman and Free Style were one of the eight pairs to return to contest the Hector Loyola designed fast track, with a winning time of 38.226 seconds.

Second place honors were awarded to Carlo Graziani of Loxahatchee, FL and his own Erato M, as the pair finished the second round with a competitive time of 38.914 seconds. Third place was obtained by Tanner Korotkin of Wellington, FL and Goldbreaker, owned by Castlewood Farm Inc., with a time of 38.925 seconds.

Sophia Thomson of Jupiter, FL and her own Bull Run’s Beat the Bullet took first place in the $250 .85 Classic, finishing with a jump-off time of 30.094 seconds. Emilia Garcia of Boca Raton, FL and C. Jack Sparrow Z, owned by Juan Carlos Garcia, captured second place after completing the short track in 30.518 seconds. Third place was awarded to Katherine Becker of New Smyrna Beach, FL aboard her own Guinness, completing the jump-off with a time of 33.952 seconds.

Reese Madden of Deerfield Beach, FL and Pine Hollow Farm’s Bella Donna took top honors in the M&S Child/Adult Jumper Classic with a winning jump-off time of 37.942 seconds. Karina Rocha Mello of Delray Beach, FL and her own Deja Vue captured second place, completing the second round with a time of 38.13 seconds. Third place was awarded to Eileen O’Leary of Monte Verde, FL and her own Bahama Boy, with a jump-off time of 39.384 seconds.

Riley McKesson of Wellington, FL and her own Del Ray captured champion honors in the Children’s Pony Hunter U/S Division sponsored by The Wanderers Club; Sophia Ayers of Reddick, FL and her own Sugarbrook Too Blue took reserve champion.

Aaron Vale of Williston, FL and Maliclaire Glancy of Wilmington, NC, both aboard Felix 1996, owned by Clare Leach, were named champions in the Low Schooling Jumper Division (1.10m). Vale was also awarded reserve champion, alongside Kimberly Leslie of Ocala, FL, both aboard her own Tailwind.