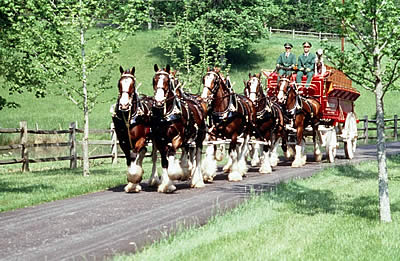 Super Bowl commercial stars and heralds of American equestrian tradition, the Budweiser Clydesdales will be performing at the 2014 Live Oak International. (Photo courtesy of Budweiser)

Tri-Eagle Sales, the local Anheuser-Busch distributor, has arranged for the mighty feathered team to visit Ocala in conjunction with their sponsorship of Live Oak International.

The Budweiser Clydesdales will appear at the Live Oak International on Thursday, March 20 and Saturday March 22.  Following a 45 minute hitching session where fans are welcome to watch, ask questions and take photos, the 8 horse hitch team will put on a driving demonstration.  On Saturday they will be positioned with the stunning back drop of Live Oak Plantation for photo ops and beer tasting from the wagon.

This year’s NFL Super Bowl marked the second consecutive year – and 12th time in 14 years – that Anheuser-Busch earned one of the most coveted honors in American advertising, USA TODAY’s consumer-judged Ad Meter for Super Bowl Commercials, with the spot, ‘Puppy Love,’ featuring a feisty, round-bellied puppy smitten by a friendly Clydesdale draft horse.

Producing the award-winning ad, whose popularity ignited a viral frenzy on YouTube, involved 17 Clydesdale horses and eight Golden Labrador puppies, and was created by ad agency, Anomaly. Horse and dog owners avidly shared both the Puppy Love commercial and its behind-the-scenes look at the making of the video. See both links here:

Today’s Budweiser Clydesdales belong to an historic breed whose19th century origins trace to Scotland’s valley or “dale” of Lanarkshire along the River Clyde.  A wealthy landowner, the Duke of Hamilton, imported six Great Flemish Horses. Known as war horses and for farm work, the Great Horses were crossed with Scottish mares and soon people outside Lanarkshire were referring to the powerful giants with graceful feathered legs as Clydesman’s horses or simply, Clydesdales.

In the early days of American beermaking, a brewer’s success hinged on how far his horses could pull a load in a day. Clydesdales, capable of pulling loads heavier than a ton at a walking speed of five miles per hour, became the unrivalled harness horse of choice for the brewing industry.

To qualify for a place on today’s world-famous eight-horse hitch, a Budweiser Clydesdale must meet size, color, and disposition requirements including standing 18 hands (about six feet) at the shoulder when mature and weighing approximately 2,000 pounds.

All Budweiser Clydesdales are geldings and must be true bay in color, with a black mane and tail, four white stockings and a blaze.  A “gentle giant” temperament is also essential to each hitch horse’s role as an equine ambassador meeting millions of horse-loving fans annually.

Harnessing 16 tons of horseflesh usually takes 45 minutes. The wheel horses, the team’s strongest, are harnessed first and closest to the wagon, followed by the body, swing, and lead teams.  Each Clydesdale is then individually hitched to their iconic red, white and gold 1903 Studebaker-built beer wagon.  After all eight horses are hitched, their driver will adjust lines (reins), weighing 40 pounds and that, once taut, can top out at well over 75 pounds.

Chester Weber, the 2013 Four-in-Hand National Champion, got his start driving Clydesdales when he was only ten years old at Live Oak.  In decades past, his family hosted and organized one of the largest draft horse shows in Ocala, and the gentle giants will always have a place in his heart.  Coincidentally the last Clydesdale sold by Weber went to Budweiser’s St. Louis hitch, and Live Oak Plantation has a long history of success and championships with Clydesdales.

True to its roots, the Live Oak International will host world-class combined driving, including the 2014 National Four-in-Hand Championship where 10-time National Champion Chester Weber will defend his title.  Driving fans can still count on the most precise, most beautifully turned-out, and most bold pony and horse teams competing here.

Live Oak International is America’s first event to bring world-class show jumping together with world-class combined driving at one venue at one time. Elegant marathon tailgating, trend-setting boutiques at the Vendor Village, a Kids Zone featuring a bounce house, and Charles Owen Competitors Club will further assure that every LOI attendee will find an event and experience sure to please.

Admission is $10 per person, $5 for children under 12, with proceeds benefiting the Marion County Therapeutic Riding Association.  For more information on the Live Oak International, including VIP Hospitality seating and sponsorship opportunities, please visit www.liveoakinternational.com.