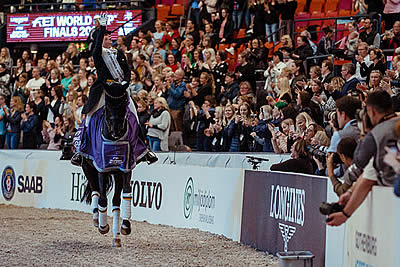 In a competition that built to an incredible climax, Germany’s Isabell Werth (49) stood firm to win the FEI Dressage World Cup™ title for the fifth time in her extraordinary career. They came from all around the globe to take on the most successful equestrian athlete of all time and gave it everything they had, but she didn’t buckle under the pressure. That’s not her style.

As she entered the arena, second-last to go of the 18 starters, the crowd held its breath in anticipation. They had watched rider after rider throw everything they had at her, piling on the pressure as they also bid for the trophy they all want to win. The spectators were in a frenzy when Sweden’s Tinne Vilhelmson Silfven and Don Auriello drew the first half of the competition to a close with a breathtaking ride on her great Don Auriello, and they went into complete over-drive when it re-started with a new leading score from their own Patrick Kittel and Delaunay OLD.

But Laura Graves (31) blew the competition wide open when strutting to a score of 87.179 with just five left to go. As the American pointed out, her gelding Verdades, one of the five stunning 17-year-old horses who have graced this Final, is just getting better with age and she stayed out in front despite a spectacular ride for Denmark’s Daniel Bachmann Andersen (28) who didn’t hold anything back when steering the stallion Blue Hors Zack to a score of 85.468.

With a beautifully balanced test during which her elegant horse Goerklintgaards Dublet looked like he could do one-tempi changes all day, another of the strong American contingent, Kasey Perry-Glass, slotted in behind him. So, Graves was still holding court at the head of the leaderboard as Werth set off. But it wouldn’t be for long.

“My ride was really fantastic; my mare did a perfect test and she really deserved the win!” said the lady whose trophy cabinet is laden with gold medals, including six from Olympic Games, eight collected at World Games, and 12 from European Championships who put 88.871 on the board. Werth is never altogether pleased when asked what still drives her, at almost 50 years of age, to still be hungry for success, but she replied simply, “I live what I do… and this is what keeps me so competitive!”

Reflecting on her performance she said, “I could take all the risks at extended canter and take her back and the pirouettes were great. We could not have been better!” Except, as she admitted, in the one-tempi changes where there was a little blip. “I was arrogant there, so that was my fault!” she said.

She may have been brilliant once again, but the prize for the most exciting test went, without a shadow of doubt, to her compatriot and 2013 champion Helen Langehanenberg who finished third on a mark of 86.571 after a performance that, quite literally, ended with onlookers gasping in disbelief. None more than Judge at C, Magnus Ringmark, whose expression was priceless as the German rider’s 17-year-old stallion Damsey FRH exploded down the centreline in a massive extended trot, halting only inches from his table. “I thought he was going to end on my lap!” the Swedish Ground Jury member laughed afterwards.

“The sport has changed a lot since I won my first Final,” Werth reflected. That was 27 years ago, also in Gothenburg riding a horse called Fabienne. “We now have such a professional team around us, and there are great improvements on all sides. It is very important for us to keep the respect for the horse for the future and it’s great to see so many older horses still performing at this level; it shows how well they are cared for and how much respect their riders have for them,” she said.

Both runner-up Graves and third-placed Langehanenberg were riding two of those 17-year-olds, still full of the joys of life and still intensely competitive. Langehanenberg said of the hard-pulling Damsey FRH, “I am thankful and really proud of him. The clapping motivated him at the end of the test and I think he would have been quite happy to start all over again!”

This didn’t just mark Werth’s fifth victory; it was also her third in succession and, each time over the last three seasons, it has been Graves who she has had to pin back into runner-up spot.

“Like Isabell said, it is our duty to take care of our horses and try to keep them healthy. My horse likes his job and never puts a foot wrong when I ride him, although at the barn he knows he’s the boss! He was so rideable today, the crowd was amazing, and I hope everyone enjoyed it as much as me!” said the American.

The greeting the riders received in the prizegiving suggested that the crowd most certainly did.