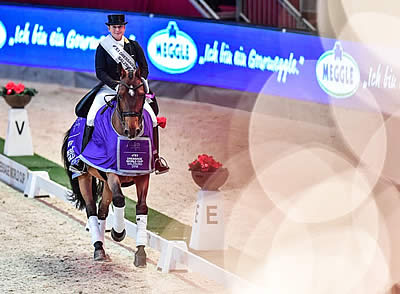 The Queen of international dressage, Germany’s Isabell Werth, continued her relentless march to the 2020 Final when winning the FEI Dressage World Cup™ 2019/2020 Western European League qualifier at Salzburg in Austria.

As defending champion, she only has to compete twice during the qualifying season with whichever horses she intends to take to the Final in Las Vegas, USA next April, and this result makes it a double of victories partnering the 13-year-old gelding Emilio in the current season.

At Lyon, France in October, the pair pinned Charlotte Dujardin and Mount St John Freestyle into runner-up spot, having been pipped by the British duo in the previous day’s Grand Prix. But although they kept their German counterparts Benjamin Werndl and Daily Mirror at bay in both competitions at the Austrian fixture this weekend, their winning margin was a relatively narrow one each time out.

At the press conference afterwards, Werndl said, “This is my favourite place… being so close to Isabell!”

But the five-time title-holder who is bidding to become the first-ever four-in-a-row FEI Dressage World Cup champion was quick with her joking reply: “I’m very happy that Ben had such a good tournament here in Salzburg and is going so well. As long as he stays like that – in second place – that’s fine by me!”

In the early stages there were smart performances from Austria’s Stefan Lehfeliner and Fackeltanz who posted 73.360, and from Ireland’s Anna Merveldt partnering Esporim. At this summer’s European Championships in Rotterdam (NED) this inexperienced 10-year-old Lusitano helped the Emerald Isle to Olympic qualification, and on his Freestyle debut posted a solid score of 73.310. A real eye-catcher was the lovely 12-year-old Robinvale ridden by Greek 18-year-old Theodora Livanos who put 74.455 on the board, but it was Swedish star Patrik Kittel who led the way at the halfway stage on a mark of 75.680 with Eddieni.

The target-score shot up to 78.150 when 2013 series champion, Germany’s Helen Langehanenberg, took her turn with the lovely mare Annabelle. But their lead didn’t last long, Werth and Emilio setting a whole new standard with another of their power-packed tests when next into the arena. It wasn’t perfect, as Werth said afterwards: “There was just a little second going into piaffe,” but, as only she can, this extraordinary competitor simply turned up the heat to throw down a new target of 85.905 which brought the crowd to their feet and put it up to the rest.

Werndl wasn’t intimidated, however. He won with Daily Mirror at this venue last year, and as a partnership the pair has just been getting better and better. They finished second at the opening leg of this series in Herning seven weeks ago scoring 84.545, fifth at the third leg in Stuttgart with 80.900, and here racked up a personal-best 84.705 with a performance filled with freedom of movement, harmony, and lightness. Only their piaffe was holding them back from a higher score that might well have challenged even closer for the win.

It looked set to be another German whitewash until, second-last to go, Victoria Max-Theurer and Benaglio snatched third place from Langehanenberg with a lovely performance that earned the Austrian duo a mark of 78.525 to the delight of the home spectators.

Werth is now planning to give Weihegold, the mare with which she has claimed the FEI Dressage World Cup™ title for the last three years, her second outing of the season at Amsterdam (NED) in January. And looking even further head, when asked which of her rides she plans to take to the Tokyo 2020 Olympic Games, she replied, “The season will decide… but it’s no secret that my first choice is Bella Rose, then Weihe and Emilio.”

Werndl has now bounced to the top of the league table ahead of Langehanenberg in second, The Netherlands’ Hans Peter Minderhoud in third, and French rider Morgan Barbancon into fourth place. The next leg, at London, Olympia (GBR) on 17 December, will bring the Western European League to the halfway stage.