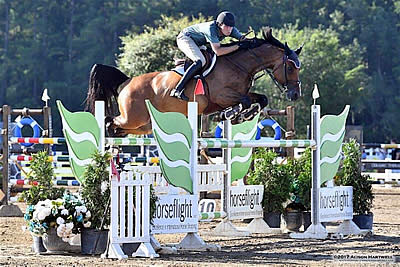 It was a winning Week I at the Charleston Summer Classic for Chase Boggio of Canton, Georgia who rode off with the blue ribbon on Nancy Boggio’s Co Pilot in the $5,000 Horseflight Open Welcome and went on to win both first and second places with Nancy Boggio’s Conway and Co Pilot, respectively, in the Grand Prix.

“We bought both horses from Derek Peterson about seven months ago,” said Boggio. “My parents were nice enough to go in on them with me. We bought them so we could have some fun with them and they are great horses, but quite different from one another,” he said.

“Conway is ten years old and completely opposite from Co Pilot. He’s almost 18 hands and has a huge stride. He jumps like he could touch the moon! He’s a little slower but he’s a little greener. Derek [Peterson] discovered his jump and threw him right in the ring. I usually ride him in the Amateur classes, but this show was the perfect place to get him into a Grand Prix and I’m happy we did so well,” he said.

“Co Pilot is eleven and has lots of experience having been ridden by Derek [Peterson] and before that Aaron [Vale]. We recently started to click. He’s a little quirky but we’ve been really consistent. We’ve placed in the last three Grand Prix we’ve done. Considering Conway is a little greener, it’s great to have a horse with a bit more experience,” he said.

The jumper action continued in the $2,000 Arenus Jr/Amateur Owner 1.25m Jumper Classic and awarded Christine Couper of Port Wentworth, South Carolina and her own Cora the blue ribbon after her double clear rounds.

Couper purchased the Hanoverian mare in June 2014 and brought her to compete at the Charleston Summer Classic as her first show three years ago and they were victorious. “She has gotten better,” said Couper. “I recently moved her up to the 1.25m and haven’t campaigned her as much as in the prior years. We’ve been working on the height and she just keeps getting better the more we show. Since Charleston is so close to us, we’ve been commuting back and forth to the show. To have a AA show here in Charleston is great. The footing felt really good and the weather was awesome,” she added.

“My horse is kept about thirty minutes from the show but I live in downtown Charleston,” she said. Originally from outside Boston, Massachusetts, Couper went to college in Charleston and then decided to stay. “For out of town folks, I recommend that they make the trip to downtown – it’s a blast! Go out for the night, check out the architecture and history, there are great restaurants and it’s really such a beautiful city,” she said.

The $2,500 USHJA National Hunter Derby took place Week I and welcomed Liza Boyd and Finally Farm’s Clemens to the winner’s circle after the pair bested the field of fifteen horse and rider teams with an overall score of 180.

“These are so useful for the hunters in the pipeline,” said Boyd. “Clemens is a first year horse and 7, so this is great opportunity to have an atmosphere of an international derby with VIP tent, the party, the 5 pm start and the excitement of the environment. There were people from town lying on blankets, picnicking near the ring and lots of distractions-typical of what may be going on during an international derby,” she said.

“He’s [Clemens] scopey so I’m not concerned about his ability, but it’s more important at this stage to acclimate him to the environment. He’s actually won an international derby and can jump a mountain and he’s very handy. I don’t want to jump his legs off, but I’ve got to train him. Allen [Rheinheimer] designed the course with tons of bending lines and I really need to practice that. I even skipped the first years with him this week and did a jumper class which went in the same ring as the derby. The horse and I need to get to know each other in that way and answer those questions we’re going to come across in the international derbies. And, the derby really had some great competition. With Jason [Berry] and his wife riding against me, I thought,’Oh gosh, they are going to make me do those turns’,” she laughed.

“I really appreciated show management making the effort to switch up the Derby jumps. They added some with no ground lines, brought in some spookier jumps and really did a nice job,” she said.

“We did one week in Charleston and have returned home to take a week off before we head out onto the road again. We stayed in a condo on Kiawah and really had a great time. It’s a boutique horse show and it was fun to be somewhere different and go to the beach, go shopping, boating and tubing. My girls and husband had a great time and my clients really enjoyed themselves. I would recommend it for anyone!” she said.