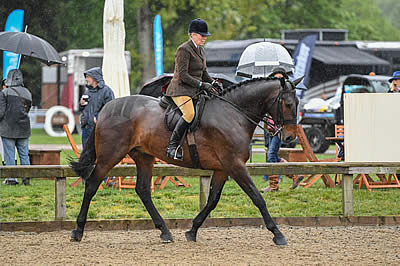 Her Majesty The Queen braved the inclement weather on the opening day of CHI Royal Windsor Horse Show to witness a memorable win for her home-bred filly in the youngstock class. Showing and National Show Jumping took centre stage, as Windsor Castle’s private grounds were opened to the public on the first of the annual five-day Show.

Showing: Horses belonging to HM The Queen shone in the show rings, nailing one outright win and two second placings against strong competition.

Her Majesty’s strapping home-bred filly, two-year-old Hampton Court Margin, headed the Cleveland Bay youngstock class, and Lancer, another exciting young home-bred prospect, was runner-up in the highly-coveted four-year-old ridden hunter class. He was produced and ridden by Katie Jerram-Hunnable, only recently back in the saddle after a year off due to breaking her neck in a fall from another horse.

This was only the second outing under saddle for the handsome bay, who narrowly missed out on a ticket to the in-hand final at Horse of the Year Show (HOYS) last season, and here, he was just pipped to the post by the reigning HOYS champion, MHS Morning Master, and Cheshire-based Robert Walker.

The run continued when Her Majesty’s seasoned heavyweight, Tower Bridge — also ridden and produced by Katie — was narrowly pipped in a very strong heavyweight hunter class. This was the first outing of the season for the nine-year-old, who was third at Horse of the Year Show in October.

“He felt fabulous and gave both me and the judge a super ride,” said Katie.

In a thrilling Castle Arena finale, the championship went to Robert Walker with last year’s champion and supreme horse here, Jill Day’s View Point, making it the fifth time Walker has scooped this most prestigious title. His reigning HOYS champion faced tough opposition en route, though, including that from the eventual reserve, middleweight winner Silent Master, produced and ridden for the Bowie family by Norfolk-based Allister Hood — another rider back in the saddle after illness.

Walker was also on form in novice ranks, where Jill Day’s stunning five-year-old, Somerville Lad, headed the lightweights before giving the team a sixth overall triumph in the section, and stablemate Patric’s Choice headed the open heavyweights, partnered by Robert’s wife Sarah in the championship.

Katie Jerram-Hunnable, who also produced The Queen’s now-retired racehorse, Barbers Shop, to stand supreme here two years ago, had more cause for celebration when her latest charge, the prolific-winning steeplechaser Cue Card, stood fourth on his show ring debut.

“He only left his [racing] training yard three weeks ago but we’re very excited about his future,” added Katie. “Plus, his owner, Jean Bishop, was overwhelmed when Her Majesty specifically asked to meet her and see the horse in its stable.”

Great Britain’s leading lady show jumper, Laura Renwick, got her 2019 Royal Windsor campaign off to a sensational start after she and her six-year-old gelding Maverick won the National 1.30m Open Jumping Competition. Renwick’s classy display in the imposing Castle Arena saw her knock a second off the time of eventual runner-up, Lily Freeman Attwood, in a blisteringly-quick time of 30.29 seconds.

Renwick’s winning streak continued, taking top honours in The Walwyn Novice Jumping Championship later in the day, after she and her six-year-old grey mare, Clarentina, faultlessly navigated the technical 1.30m course. Just four of the 11 horse and rider combinations, who qualified from the Equitop Myoplast Senior Foxhunter, went clear to progress to the jump-off. But it was Renwick’s supreme levels of bravery and speed, which proved to be the deciding factor, beating Ronnie Jones and Interstar B into second place by a convincing 1.24 seconds. Pippa Goddard and Nero Van De Kwade Heyde took third spot, while William Funnel and Billy Pablo slotted into fourth.

The biggest class of the day, the Land Rover National 1.40m Open Jumping Competition, went to Robert Whitaker and Major Delacour after the duo pipped Jay Halim and Aragon Z 414149 into second place by just 0.29 seconds. The class was closely fought with 21 of the 50 starters going clear, and under a second eventually separated the top six-placed riders. Third to go, Whitaker and his 11-year-old chestnut gelding were dominant from the off, as they effortlessly mastered the challenging course, much to the delight of the Castle Arena’s crowd. The day’s earlier star jumper, Laura Renwick, and Top Dollar finished in fourth place in a time of 38.34 seconds, while Oliver Fletcher and Hello Discko Boy went one better to claim third spot.