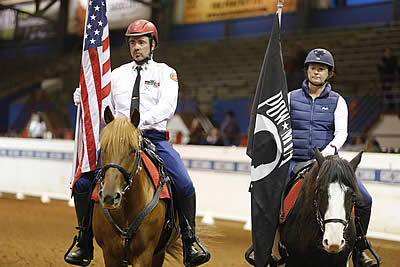 Welch and Gruber brought Gruber’s five-year-old mustang gelding OWH Pearl Harbor and her eight-year-old mustang mare Little Red Hot from Welch’s organization, Operation Wild Horse (OWH), to demonstrate the powerful impact a combination of Western dressage and mustangs can have in the healing process of both mind and body for veterans. OWH focuses on engaging veterans and their families with domesticated mustangs in a therapeutic setting. There the veterans are taught about horse care, horsemanship, and riding skills through Western dressage.

In his first ever national championship, Welch went on to compete Little Red Hot successfully in several tests over the course the competition, earning a top-10 placing in the Introductory Test 3 Amateur division.

Welch and Gruber shared why the seemingly unlikely combination of a mustang, a veteran, and Western dressage are a perfect match in supporting American veterans.

Why are mustangs and veterans a good fit?

Welch: “Considering that these animals lived in the wild, there are a lot of parallels between American military veterans and mustangs. The biggest one being fight or flight. These mustangs are very hyper-vigilant, very aware, and so are America’s veterans. It’s what we’re trained to do when we serve. And that’s for safety. Truly, working with the mustangs is like working with a mirror and being able to see yourself for the first time. What we feel we’re doing and what the horse shows us we’re doing is undeniably one of the most therapeutic things that I’ve ever experienced. I love everything there is to love about a mustang. They lived in the wild. Anything that can live in the wild and then learn to be domesticated and take care of someone like myself … there’s nothing not to like about it.

“We believe there is a special bond between veterans and something that has lived in the wild and had to survive. We have a new mustang coming to us that has claw marks from a cougar or a mountain lion, and there’s an Army Sergeant Major that did 22 years in the military that has already been working with her with a colleague of Patti’s. We don’t even have her yet and he’s working with her.”

Gruber: “We don’t know what his draw is to her yet—he’s relatively new to the program—so we don’t know what he sees in her, but he met her at a fundraiser and that was it for him. He’s texting me about her blankets for winter, asking if we need to pick out a color for her. You know, he’s a tough Army veteran who has two sons and this is like his daughter. It’s amazing.”

Where do you get the mustangs?

Gruber: “Our mustangs come from different sources. Some have come through the Mustang Heritage Foundation, we have a couple that have come through private homes, including veterans or the families of veterans, and we also get them through a rescue network that gets them out of auctions and kill pens.

“So our motto has become “horses helping veterans helping horses,” because as much as the horses do for [the veterans], we also do some rescue work to get these mustangs into better situations. We get the mustangs into forever homes where we never have to worry about where they’ll end up. They get all the food that they want, and they come in at night to their stalls where they can just relax and chill. They have their own space and they aren’t fending for their lives or wondering if they’re going to end up in a bad situation. The ones that come to us never have to worry, because they have a forever home with us.

“Mustangs are not seen as the most valuable horses; a lot of them get overlooked for what they can do. A mustang can naturally jump six feet from a standstill … and do, regularly! They make great mounts, whether it’s for dressage or cowboy mounted shooting or barrel racing, and they’re amazing endurance horses because, naturally, they travel 20 to 30 miles a day to find enough food and water when they’re out in the wild.”

Welch: “Our veterans are very, very big into the mustang rescue aspect. There’s more draw for our rescue mustangs than anything, because a lot of us felt like we needed to be rescued. One of our key things [at OWH] is to ensure that we have enough funds to have horse treats in the veteran aisle so that whenever veterans come, they can interact with their horse. That’s so important, because that is the relationship-building aspect of it.

“I had maybe been on a horse once or twice [before OWH.] Patti approached me with this idea for OWH, and in my first humbling experience in all of this I said, “Honestly, I don’t think that horses and veterans have anything of value to offer each other, but I’m willing to listen.” She just had a completely different approach to it. Then I met her mustang, Padre, and in a barn full of 30 domestic horses, there was just something so special about him. I just connected with him.”

How does Western dressage aid the veterans’ healing process?

Gruber: “Dressage itself is the oldest form of military riding, dating all the way back to the Knights of the Round Table and the battle maneuvers those horses used to do, so it has a direct link to the military already. The structure of Western dressage gives the veterans we work with something to work towards, goals to work towards. ‘Can I move up the levels?’ is the same idea as ‘Can I get more rank when I’m in the military?’ So there are direct correlations on multiple levels.

“And who doesn’t want to be a cowboy? Who doesn’t want to throw on cowboy boots and jeans and go get on a horse? It’s just cool. We’ve had veterans tell us being on a horse is the closest thing they’ve had to being in the military, because you’re in control but at any moment you could be out of control.”

Welch: “Western dressage is a perfect fit for us because the most important thing to us is safety. Safety of the rider, safety of the horse, and safety of the spectator. That safety is built through a foundation of the basic principles of riding, dressage. If you’re going to do it, you might as well do it right, so Western dressage being the foundation of what we do is creating that undeniable safety in working with mustangs.

“Doing the tests in Western dressage reminds me a lot of marching. It reminds me of being aware of your position, your form, all of these things very disciplined and being top-notch.”

How does having the WDAA’s support advance your mission of helping veterans and mustangs?

Welch: “Our relationship with the WDAA is fairly new, but it has been the most welcoming relationship, one of the top welcoming relationships we’ve had in the horse world. It was very fitting. I can’t say enough about the decisions the WDAA Board of Directors have made to immediately put into play a veteran membership and a veteran lifetime membership, which comes with a buckle. They have opened their doors to us. I now serve as Veteran Liaison to their board, which means that the board is hearing proposals for how to include veterans, what we wanted to do, and so on, directly from the Operation Wild Horse veterans that I relay back to the board.

“In a short amount of time, they have done so much for us and for veterans already. That’s why we’re here. We want to be part of organizations that want to take care of veterans. WDAA is leading the way in what will be a very successful veteran program, and I hope other breeds and disciplines will model off of that.”

Gruber: “WDAA is doing great work and leading the way in integrating veterans into the Western dressage community and competitions. The other areas of the sport and their organizations could absolutely open their doors and open their membership to encourage more veterans to get involved with it. I don’t think they need to have specific classes for them, but [they can] award and acknowledge their achievement when they are out there in the ring at a show.”

The WDAA recently announced that the USEF Youth Sportsman’s Grant has been awarded to OWH for their youth outreach program. Through the program, children of veterans and active duty military learn horsemanship and riding skills utilizing Western dressage. Additionally, OWH works with active duty military under the age of 22 and Poolees, individuals under the age of 22 who are going into the military. This program concentrates on the therapeutic attributes of horse riding, ground work, and the comradery that accompanies the equestrian community atmosphere.

This no fee annual program has been in place since February 2017, but participants were limited due to the shortage of equipment. The $1,500 grant will allow OWH to implement the curriculum on a larger scale as proper equipment can be purchased to provide the safest atmosphere possible for participants ages 2-21.