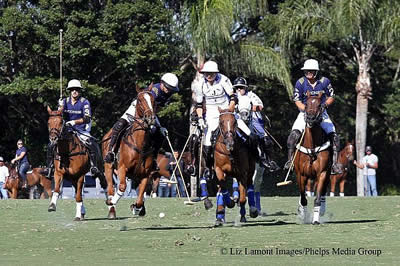 Wellington, FL – February 18, 2015 – Valiente defeated Lucchese 11-8 and Coca-Cola bested Villa del Lago 14-9 in Wednesday’s semifinals of the Ylvisaker Cup at the International Polo Club Palm Beach. Valiente and Coca-Cola will face off Sunday in the finals.

Adolfo Cambiaso didn’t ride for Valiente in the Ylvisaker Cup semifinals Wednesday, but his handprint was all over the field. It was particularly visible in the second half, after his powwow with the team transformed a lackluster first half into a scoring tsunami for Valiente. Tommy Beresford said Cambiaso called a team meeting at halftime and “gave us some tips, changed a couple of players, tweaked a few things.”

Whatever wisdom Cambiaso imparted, it worked – and then some. Valiente, which was scoreless in the third chukker and trailing by one point at the half, played the rest of the game like the polo field was a bed of hot coals. Leading the attack was Sapo Caset, riding in the 10-goaler slot otherwise occupied by Cambiaso. (Earlier in the tournament Caset played in place of Cambiaso, who wanted to give a physical issue some rest. Cambiaso said he asked to play in Caset’s slot in the quarterfinals so he could “get the rhythm,” as he hadn’t played since he won the Argentine Open in December. At present the Caset/Cambiaso seat in Sunday’s finals is expected to go to Caset, but that could change.)

In stark contrast to Valiente’s push in the second half, the early part of the semifinal was deceptively tight and low-scoring, with the teams either tied or separated by a single point at any given time.

“The first half we were just kind of seeing what they were doing and adjusting ourselves to them, and then we came out in the second,” said Caset. He acknowledged that he missed a lot of goals in the first half. “In the second half I tried to make the approach from closer to the goal so I’d just have to tap it in” (quite possibly a tip from Cambiaso).

Caset went on to score three consecutive goals in the fourth, stopping Lucchese in its tracks and keeping it scoreless throughout the chukker. His first goal in the second half tied the game 4-all, and his series of follow-ups brought Valiente into a strong, sustained lead. Caset’s play in the fifth was a repeat performance of his fourth-chukker act (two goals from the field and another on a penalty). Still, he wasn’t done, blazing into the sixth to make the final goal of the game and sew it up for Valiente with a three-point spread.

That’s not to say that Lucchese didn’t try, and mightily so. Powerhouse 8-goalers Magoo Laprida and Nico Pieres gave Valiente as much grief as they could, targeting the tag-team of Caset and Santi Torres at every turn. Laprida and Pieres were in warrior mode the entire time, making all of Lucchese’s goals (except for one in the final chukker by Andres Weisz) with the instrument control and patience of a surgical team.

The Santi-Sapo squad made that as difficult as possible for Lucchese, using some exceptionally creative moves. Torres confused his defenders by slowing the ball down and letting them take turns swinging at it, all the while nonchalantly keeping it in his wingspan. He waited until the perfect moment to release the ball for Caset, who snatched it and scored. At the top of the fifth Pieres turned the ball around and tapped it solidly downfield four or five times, only to have Caset swipe it and send it to goal.

For a brief but impressive span in the sixth, it looked like Lucchese had a chance to turn the tide. A goal by Laprida tightened Valiente’s lead to one point, bringing the score to 9-8. Lucchese was looking good for another goal as Pieres and Laprida brought the ball forward, repeatedly trading it back and forth and gaining yardage. But Valiente ended that. Torres claimed the ball, dribbling until the right moment to send it to Caset, who passed it on to Beresford on a backshot. With John Muse on his hip and rapidly gaining ground, Beresford shifted into overdrive. He sent the ball downfield with a beautiful cutshot and then sliced it into goal. Caset had the final word with another goal from the field, ending the match 11-8.

Coca-Cola came out gunning Wednesday in the Ylvisaker Cup semifinals after the first chukker closed with a 2-2 tie. The red team snatched the lead in the second chukker and extended the gap to five points, defeating Villa del Lago 14-9.

The style of the match was polo as it is meant to be played – wide open and fast, with fewer whistles than you could count on one hand. Exceptional accuracy by both teams resulted in very few missed shots, and in Coca-Cola’s trademark team play, all four of its members scored.

That has been a recurring theme for Coca-Cola, which has succeeded repeatedly in the tournament on the combined strength of its roster. Julio Arellano and Sugar Erskine, who can always be counted on as the team’s high-scorers, each contributed five points Wednesday. Gillian Johnston continued in the super-strong play she has exhibited throughout the tournament. She pounded in three goals from the field, most of them while piloting one of her gray speed sticks.

Mason Wroe had the first goal of the match, made from the field for Coca-Cola. But Polito Pieres, a perpetual scoring machine, came back for Villa del Lago. He slammed in goals in every chukker during the first half and again in the final chukker. A major tactician, Pieres took advantage of broken plays every chance he got, turning the ball around and running it down the field to score. He also tried every defensive trick in the book to break the Coke machine, but even he couldn’t prevail.

It would have been a tall order for any team to thwart Coca-Cola’s momentum, even one powered by Pieres. Johnston set the tone in cement early on by doing what she does best -materializing in the precise place where she needs to be and then charging to score or delivering the ball to Arellano or Erskine for the goal. In the third chukker, she held up the Villa del Lago defenders long enough for Erskine to pounce on the ball and scamper away with it to score.

Johnston and Arellano also had some excellent shared plays. In the fourth chukker she ran the ball almost three-quarters of the length of the field, fooling everyone (except Arellano) when she suddenly abandoned it in the goal mouth, leaving it for Arellano to tap in. Coca-Cola made three goals in the fifth, all of which Villa del Lago answered in the sixth, ending the game 14-9 for Coca-Cola.

How did Coca-Cola spin its magic?

“Mason was super-solid at the back door, Gillian had some great goals and Sugar’s just been on fire in every game!” said Arellano.

In Erskine’s view, “We just got away. We planned on playing really hard on the man and feeding Gillian all day. We stayed on top and didn’t change our game plan, which was to play as straight out as we can but as close as we can to our man.”

Wroe attributed Coca-Cola’s win to Arellano’s guidance. “He gets us organized and prepared before the games, and we know what our assignment is,” said Wroe. “We knew this was going to be a tough game. We just kept pushing and kept to the plan, and hopefully good things would happen. Luckily today, we came out on the side of the W.”