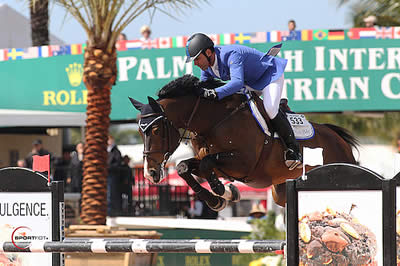 Suncast® is the title sponsor of week seven at WEF. Competition runs February 18-22 featuring the $372,000 Suncast® CSI 5* Grand Prix on Saturday, February 21. Other highlights include the $127,000 Ruby et Violette WEF Challenge Cup Round 7 on Thursday afternoon and the $85,000 Suncast® 1.50m Championship Jumper Classic on Sunday morning. All three of these events will be livestreamed at www.COTH.com. Watch tomorrow’s class HERE: http://bit.ly/19y8urf. The 12-week WEF circuit continues through March 29, 2015, awarding over $8.2 million in prize money.

Steve Stephens (USA) is the course designer in the International Arena for week seven. He set the speed track for 69 competitors in the 1.45m class and saw an even thirty clear rounds. Third to go, Doda de Miranda and AD Amigo B set the leading pace at 55.16 seconds and held on to the end for victory. Ramsay and Welfare clocked in at 56.46 seconds to finish in second place. Parot and Tailormade Anna Chacca had a time of 57.82 seconds to place third.

“He was very good today. The course was super for him because it had long lines, and he has a big stride,” De Miranda said of his round. “I was a little unsure if it would be possible to win because normally he takes more time on the jumps. He jumps very high over the oxers and I knew there were a few horses coming that are very quick on the ground and don’t lose too much time in the jump, but it was good. Going in the beginning like that I knew that I needed to go as fast as possible. It worked. We had a good plan, and I am very happy.”

De Miranda and the ten-year-old Dutch Warmblood gelding (Tadmus x Heartbreaker) won the same class during week four and AD Amigo B had last week off to rest. He will have a day off tomorrow and jump again in Friday’s 1.45m.

“I hope now with one day off he will be good again on Friday,” the rider expressed. “Sometimes he can get very difficult in the mouth when you go fast one day. It is good that he will have one day in between classes that he can flat a little bit and do some poles on the ground just so he’s more relaxed.”

“He is a very sweet horse,” De Miranda detailed. “He is spooky, not in the fences, but in the warm-up. I have to watch out because he sees something, and he will spin very quickly. He gets scared with noise or quick movement, like in the wind today he was like that a little bit, but when he goes in the arena he is very focused and he is 100% with the rider. Some horses are okay in the warm-up arena and then they go in the show ring and they give you trouble, but he is the other way around, which is nice. You cannot relax in the warm-up because you don’t want to fall off for a stupid reason, but when he is in (the show ring) you can press him one thousand percent and he is going to do everything to do his best for the rider.”

Competition continues on Thursday with the $127,000 Ruby et Violette WEF Challenge Cup Round 7 featured in the International Arena and the presentation of championship honors to the Pre Green Hunter 3′ division in the Rost Arena. For full results and more information, please visit www.pbiec.com.