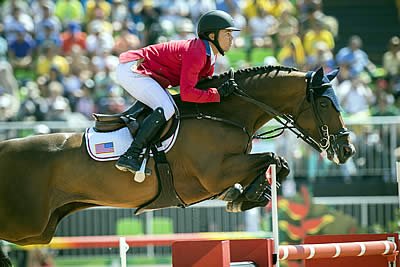 Lausanne (SUI), 4 May 2017 – Olympic silver medallist Kent Farrington (USA) has overtaken compatriot McLain Ward to jump up to the number one spot in the Longines Rankings for the first time.

Farrington, a member of the US squad that took team silver at last year’s Rio Olympic Games, was lying second in the previous rankings, separated from his fellow American by just 23 points. But the 36-year-old, who has featured prominently in the rankings since 2013, has had a great run of form recently, with a 5* victory in Antwerp with Sherkan D’Amaury, and a win in Miami and second in Shanghai with Creedance boosting his points tally to 3,255 to finally clinch the coveted world number one slot.

Ward, whose sensational win at the Longines FEI World Cup™ Finals in Omaha had put him on top of the world in the April rankings, has now slid back to second on 3018, 37 points adrift of Farrington, with Germany’s Daniel Deusser closing the gap in third on 3010.

Farrington is based in Wellington, Florida and has built up a strong string of 5* horses. He is a five-time FEI World Cup™ Jumping finalist and was just outside the individual medals in Rio when finishing fifth at the first ever Olympic Games to be hosted in South America.