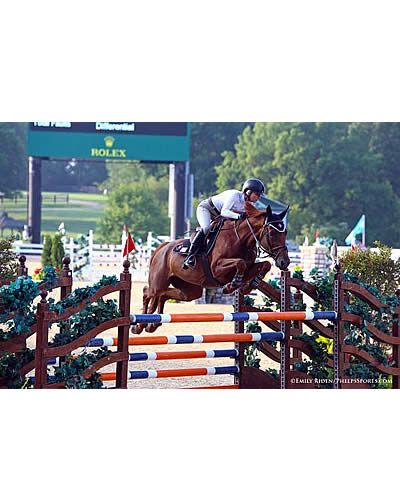 Lexington, KY – July 29, 2015 – Adam Prudent and Madeleine Stover earned victories for Plain Bay Sales at the Kentucky Summer Classic on Tuesday, and on Wednesday, it was Abigail McArdle’s turn.

In the $5,000 1.40m Open Jumpers, McArdle piloted Plain Bay Sale’s Harriri to the victory, finishing double clear with a jump-off time of 39.050 seconds.

From a starting field of 34 entries, 20 completed the first round Florencio Hernandez designed course without fault, turning the jump-off portion into a close foot race – all mostly in hot pursuit of McArdle and Harriri’s time.

The pair had gone only second in the order and returned immediately to set the jump-off time that would hold up for the entire remainder of the class. While none could beat McArdle’s time, all of the top five would come within just two seconds of it. Amanda Derbyshire and Lady Maria BH, owned by David Gochman, came the closest, finishing in second on time of 39.301 seconds. Rounding out the top three and finishing in a time of 40.276 seconds was McArdle’s fellow Plain Bay Sales rider, Madeleine Stover, on Chester Ridge LLC’s Camillo.

At only 8 years old, Harriri is a relatively new mount for McArdle, having been purchased by Plain Bay Sales and started during the 2015 Winter Equestrian Festival with the intention of turning the mare into a competitive children’s horse for the 1.30m.

“I was just going to get on and do a couple classes,” McArdle said. “Then we realized, ‘hey, this horse has got some scope.’ So then we did a couple of 1.35m, 1.40m and 1.45m classes. We realized that this horse is special. She’s only 8 so we’re taking it a little bit slowly, but you’re definitely going to see her in the grand prix within the next couple of years.”

McArdle continued, “We always say she’s going to be super special and as big a winner as Cosma [20], and so far that’s been very true to form.”

Cosma 20, owned by David McArdle, has continuously been a top mount for McArdle, racking up top finishes internationally and in Kentucky, and on Wednesday it was again Cosma 20 who found her way to the top of the leaderboard. The 12-year-old Hanoverian mare took the top call in the 1.35m Open Jumper speed class where she finished fast and faultless in a time of 56.682 seconds.

From the field of 35 entries, none would come even within eight seconds of McArdle and Cosma 20’s time. The second best time of 64.807 seconds went to Martin Mallo and Michelle Navarro Grau Dyer’s Sato Yama, and third went to Conor O’Regan and Salamander Farm’s Salome De Mars on a time of 64.863 seconds.

“We’ve been trying to jump in a lot of the FEI classes, and I’ve been keeping her as my speed horse,” McArdle said of Cosma 20. “But here in Kentucky it’s a great opportunity for me to jump the smaller grand prix. She’s funny to prepare, because her best preparation is going in a smaller speed class and really boosting her confidence up. This is really preparing me for tomorrow.”

McArdle and Cosma 20 will return on Thursday night for $25,000 Hagyard Lexington Classic, but first McArdle added yet another win to her Wednesday streak. She claimed the victory in the 1.30m Open Jumpers aboard David McArdle’s Tina, while second went to Plain Bay Sale’s Adam Prudent on Pensilvania, owned by Dorothy Cox.

Longtime friends Tim Goguen and Bob Crandall are accustomed to competing against each other across the country, whether they’re in New York, Florida or at the Kentucky Horse Park. On Wednesday, the top riders tied for the Kentucky Summer Classic hunter grand championship, each racking up 50 points by taking home all five available blue ribbons in their divisions.

Crandall and Erin McGuire’s Casallo were the first contenders for the grand championship, adding the final two blue ribbons to Tuesday’s three in the Green Conformation Hunter division. The duo secured the division’s championship, with reserve going to Winn Alden and Elizabeth Nestor’s Covert, who claimed the remaining two second-place spots for a total of five red ribbons.

“Winning all five classes is always great,” Crandall said of his clean sweep. “It doesn’t happen often whether it’s a big or small division, so it’s always great just when you’re happy with your horse. He has just been amazing. It’s been such a treat to have him back, and I thank the McGuires and Jack and Liza Towell for that.”

In the Second Year Green Hunters, Goguen and Saddle Ridge LLC’s Ransom followed suit, claiming the top spot in both the classic and handy hunter rounds for a total of five blue ribbons to earn the division’s championship. The reserve championship went to Isabelle Pott’s Fusagers Carma, who was shown by Jordan Gilchrist.

“Ransom’s just been really steady and consistent through Florida, [the Devon Horse Show] and up here with Vivian [Yowan] in the Junior Hunters and Second Years,” Goguen said. “He’s 6 years old and was reserve at Harrisburg in the First Years and in the Junior Hunters as well. Ransom is just so scopey, and he tries really hard.”

With both Goguen and Crandall tied with perfect scores of 50 points at the end of the day, the grand champion award, sponsored by Visse Wedell for Douglas Elliman Real Estate, was split between the two riders, who willingly shared in the honors.

“I guess if I have to share, sharing with Tim was OK,” Crandall laughed. “Upstate New York reigns again.”

Goguen and Capella added a first and third to Tuesday’s two firsts and second, edging out the rest of the field to earn the title.

“Capella has been champion or reserve every week that we’ve shown him up north,” Goguen said. “He’s in the same realm as Ransom as far as being very scopey. It’s very easy for him.”

Rookie’s second and fourth place finishes added to Tuesday’s two seconds and first gave him enough points for the reserve.

“Rookie didn’t start until spring here,” Goguen continued. “He has really come along, as well. He’s good going around; he a can jump a very good jump. I think he’s going to win his share in this division, as he’s been doing. We call him a Labrador because he’s so friendly in the barn, and he’ll just get in your lap.”

Rounding out the day were the High Performance Hunters, with the division’s championship going to Fleur De Lis Farms’ Bowie, who was piloted by Courtney Calcagnini. The pair earned two blue ribbons, added to Tuesday’s first and fifths for the top spot. The division’s reserve championship went to Bill Schaub’s Avalon, who was ridden by Molly Sewell.

The junior hunter divisions begin on Tuesday, with the amateurs scheduled to show Saturday and Sunday. The $5,000 USHJA Hallway Feeds National Hunter Derby will take place on Saturday.

What:
The Kentucky Horse Show LLC’s 2015 series includes five weeks of top competition throughout the summer. These premier hunter/jumper competitions host the Hagyard Challenge Series with seven grand prix competitions that culminate with a Leading Rider Award, as well as the Hallway Feeds National Derby Series.

Parking:
Horse Show Exhibitors may purchase a weekly parking pass at the main Horse Park entrance for $15.00. Dogs are permitted at the Kentucky Horse Park on a leash.

Directions:
The Kentucky Horse Park is located 8 miles northeast of Lexington, Kentucky at Exit 120 on Interstate 75.

Hotels:
CLARION HOTEL (http://www.clarionhotellex.com) (Formerly Holiday Inn North) – 859-233-0512 – Approximately 4 miles (OFFICIAL HOTEL)
Discover the place where elegant comfort in an ideal location meets excellent service and affordability. At the Clarion Hotel Lexington, you’ll find well-appointed accommodations with options of double/doubles, double queens, king rooms or suites, exceptional amenities such as our free hot breakfast buffet, and Southern hospitality at its finest. The best hotel for Keeneland – Located in the heart of Kentucky’s Bluegrass Region – home of the Kentucky Horse Park, the Lexington Convention Center, University of Kentucky, and the Kentucky Bourbon Trail – our Lexington hotel is on Newtown Pike at Exit 115 on I-75, close to all the big attractions, and is the perfect place to stay whether you’re here to get down to business or have some fun. Best of all, bring your furry friends for any trip because the Clarion Hotel in Lexington is also pet-friendly.

CAMPGROUND RESERVATIONS:
Reservations may not be made through the Horse Show office. To reserve a campsite at the Kentucky Horse Park for any of the horse shows, please call the Campground store at (800) 370-6416 or 859-259-4157 or email Ryan McGaughey at Ryan.mcgaughey@ky.gov. Be specific as to the show name and the dates you wish to stay. Check-in time is 2:00 p.m. and checkout is 12:00 noon. You must make arrangements with the Campground store if you plan to arrive earlier than 2:00 p.m. or stay later than 12:00 noon. Vehicles that are not removed from a campsite by check-out time will be towed.