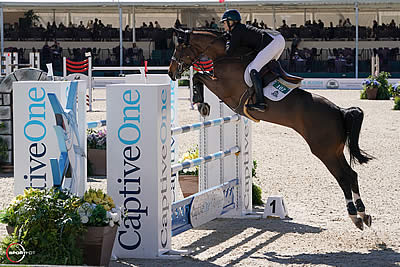 Foster got the ride on Northern Light from owners Andy and Carlene Ziegler of Artisan Farms at the end of September. The mare is the former mount of Olivier Philippaerts (BEL) and was a match with Foster from the very beginning.

“When I rode her for the first time, I had a very good feeling,” said Foster. “You get the feeling that she’s a really intelligent horse. She knows where the jumps are and she is the same every time you get on her.”

Week 3 of WEF came to a close with Sterling Malnik of Palm Beach, FL and Rockette claiming the Junior Hunter 3’3” 15 and Under championship in the E. R. Mische Grand Hunter Ring. The pair earned two firsts, a second, and a fifth-place ribbon.

Malnik, trained by Bill Schaub, has only had Rockette for about one month. She recently purchased the 10-year-old mare from Ramble On Farm. Malnik is thrilled to have such a kind and talented new mount for this season. “She just blows my mind and always jumps incredible!” described Malnik.

Rockette and Malnik just started competing in the Junior Hunter 3’3” division this circuit and are already off to a great start. “She’s a proper lady; if you respect her, she’ll respect you,” said Malnik of Rockette.

The pair had consistent rounds throughout the two days of competition and also won the under saddle. Malnik believes that it was Rockette’s jump and their combined “cuteness factor” that made them stand out to the judges. “She is amazing and I think she jumps better than any other horse out there,” the rider commented.