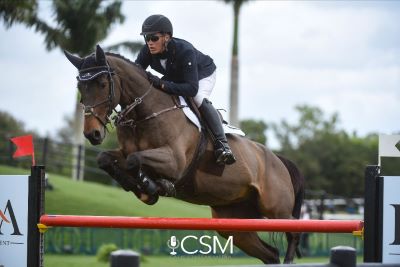 Ranked among the country’s top 10 U25 riders, Tanner Korotkin stayed true to form in winning the $10,000 FEI Hermes U25 Welcome with Castlewood Farm’s Deauville S during Week 6 of the Winter Equestrian Festival in Wellington, FL.

After three weeks of U25 competition, Korotkin and the 15-year-old Holsteiner gelding have asserted themselves as one of the division’s top competitors. The win marked the pair’s third podium finish in four outings this season.

“Deauville and I had a very nice and smooth but obviously very quick round,” Korotkin said. “There were a lot of very fast horses that went before us, and I was thinking about the following day’s grand prix. I wanted to be fast enough to win the class, but I also wanted to keep it as smooth as possible. He jumped fantastic, and he’s such a naturally fast horse that he ended up just taking the win.”

While Korotkin and Deauville S are contesting just their first WEF as a pair, they are approaching the one-year mark of their partnership. It’s been one defined by a near-instant connection; in Deauville S, Korotkin found an experienced mount that shared his indistinguishable competitive fire. The big-bodied bay gelding is rarely not in motion, often characterized by his sideways canter upon the approach to a fence, but nowadays, Korotkin finds navigating the less conventional ride almost second nature.

“Since the first day I rode him, I absolutely loved him,” Korotkin. “The way he goes — even though he canters sideways at times, I just love his forward motion. He’s always with me, and he always wants to jump a clear round. I’d say, he’s the first horse in my career that I’ve had this strong of a partnership with.”

Confidence carries, and Korotkin heads toward the second half of the winter circuit fresh off a career-best week.  Just a day prior to his U25 win, Korotkin finished fifth with a double-clear performance aboard Sandalwood Farm’s Country Boy in the $37,000 CSI3* WEF Challenge Round 6.

“He jumped absolutely incredible,” Korotkin said of his top senior mount. “It was our first three-star back in a couple weeks, and I couldn’t have asked for a better result with him.”

Korotkin has additional three- and four-star competitions circled on his calendar for the remainder of the winter circuit, as well as the upcoming U25 Semifinal under the lights at the Palm Beach International Equestrian Center during Week 8.

“I think the U25 series is great,” Korotkin said. “It gives you a real feel of what true FEI classes are like, and you get to compete against some very good riders without going in to compete against the best of the world, just yet. Deauville S will aim for those classes, and after WEF is over, we’ll jump back into some more ranking classes.”