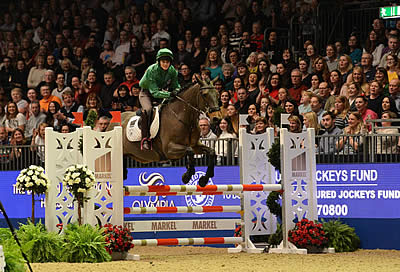 Sir Anthony ‘AP’ McCoy OBE and Bridget Andrews have been confirmed as the team captains for the 2019 edition of the Markel Jockeys Jumping, in aid of the Injured Jockeys Fund, at Olympia, The London International Horse Show. Returning for another electrifying year, the legendary ‘Race Night’ will thrill the audience of Olympia Grand with two star-studded teams, including the world’s top jockeys. Taking place on Friday 20 December 2019, spectators of the Show can expect nail-biting action as the teams battle it out for the Champions’ Crown.

Now in its fifth year, the Markel Jockeys Jumping, in aid of the Injured Jockeys Fund, will see some of Britain’s world-class jockeys switch disciplines to compete in a relay show jumping competition, swapping the racetrack for the Olympia arena in front of a 7000 strong crowd. This year’s format will see an all girls’ team, captained by Bridget Andrews and including top names Bryony Frost and Hayley Turner, go head-to-head with an all boys’ team captained by 20-time champion jockey, Sir Anthony McCoy.

Bridget Andrews, who recorded her first Cheltenham Festival winner in 2018, is one of the best female jump jockeys in the UK. Joining her will be Bryony Frost, who earlier this year became the first woman to win a Grade One race over fences at the Cheltenham Festival. Hayley Turner OBE will also join the all girls’ team. Hayley is a multiple Group One-winning jockey with over 800 career wins, making her the most successful female flat jockey of all time in Britain. This year she became the first woman for 32 years to win a race at Royal Ascot.

Joining Sir Anthony McCoy will be former flat champion jockeys, Ryan Moore and Jim Crowley. Harry Skelton will also be returning in hope of defending his title in rather less dramatic circumstances, following a bridle malfunction in the 2018 event. The final line-up of remaining members will be announced at a later date.

Captain of the boys’ team, AP McCoy, said: “The atmosphere at ‘Race Night’ is electric and I love being a part of the Markel Jockeys Jumping. I’m looking forward to once again showing the girls how it’s done! In addition to all the fun, it shines a light on all the great work the Injured Jockeys Fund do in both the racing world and across the wider equestrian community.”

Juliet Redfern, Head of Equine Insurance at Markel, said: “Markel is delighted to be continuing its support of this fabulous event, which just seems to get more popular every year. The Injured Jockeys Fund is a wonderful charity, that looks after its own so well, and we couldn’t be happier to be returning to Olympia for a fifth year!”

Taking place in the iconic Olympia Grand this Christmas (16-22 December), Olympia, The London International Horse Show is a highly anticipated equestrian event which attracts the best riders and drivers from around the world. The week of equestrian action will see many of the world’s best athletes travel to the iconic Olympia venue, as the Show hosts three FEI World Cup™ competitions in Dressage, Carriage Driving, and Show Jumping.

Spectators can also look forward to entertainment from The Shetland Pony Grand National, Kennel Club Dog Agility, and the festive extraordinaire: the Christmas Finale. The 2019 edition of the event will open its doors to two international displays including the Household Cavalry Mounted Regiment, performing its Musical Ride at this year’s Show. Made up of 28 horses and 36 mounted ceremonial service members – who also serve as fighting soldiers – the Musical Ride is unique across the globe, as it demonstrates exceptional horsemanship and the very best of British military tradition. Horse Whisperer, Jean-François Pignon, will be debuting his ‘Black and White’ display for the first time in front of a UK audience. Adding to an already impressive line-up of displays, Pignon’s performance, which comprises six white and two black mares, is bound to be a crowd pleaser as he wows the crowds with his unique skills.