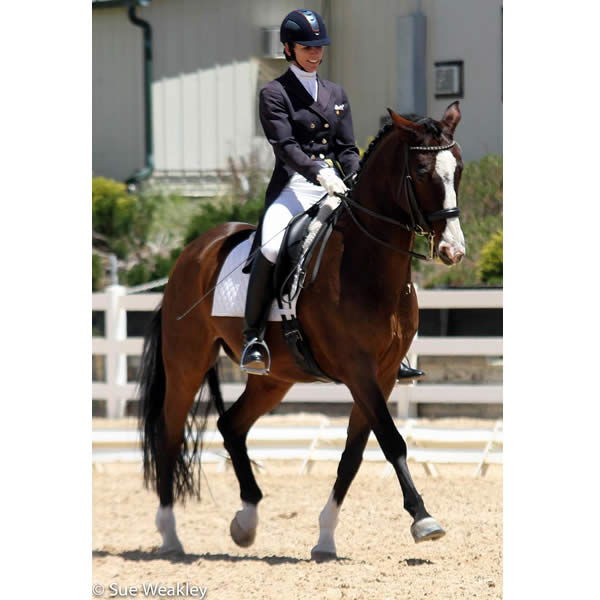 Shannon Dahmer and Rock On extend during the FEI Freestyle Test of Choice at the Colorado Horse Park’s High Prairie Dressage II.

Parker, CO – June 1, 2013 – Shannon Dahmer rocked it with Rock On in the FEI Freestyle Test of Choice to score a 68.000% in today’s High Prairie Dressage II at the Colorado Horse Park. The pair could swing “Dancing with the Stars” with their Grand Prix Freestyle featuring double pirouettes and spot-on one-tempis to “Eye of the Tiger” and other music from the iconic movie, “Rocky.”

Dahmer said the freestyle score was chosen because Rock On’s barn name is Rocky, but more germane to the Rocky theme woven throughout today’s winning freestyle is the 16-year-old Oldenburg’s history as a fighter who beat the odds to triumph in the dressage arena.

In 2009, Rocky nearly died from founder. Dahmer and Rocky’s owner, Mary Allyn, were the ones who brought the gelding back to health to help him claim his heavyweight crown. “Isn’t that amazing that he’s doing the Grand Prix?” Allyn asked. “It was a labor of love and he’s such a special horse. It’s amazing to get a horse to Grand Prix anyway and especially one who foundered. He’s special.”

“Shannon has obviously done an amazing job,” Allyn said of Rocky’s rider. “She’s the one who brought him to Grand Prix.”

Dahmer is one proud trainer whose fondness for the knock-out horse is obvious. “He’s rideable now,” she beamed.

Another horse and rider pair who rocked the freestyle was Jane Ann Lake and Tecolate who scored a 63.333% in the USDF Freestyle Test of Choice at second level.

She continued, “You do your best and that’s all you can ask for. So, hopefully, by this afternoon for his second class, he’ll be much calmer.” The pair earned a 63.05% in the Second Level Test 3 – Masters’ class later in the day.

Another exciting series of classes at High Prairie Dressage included the $750-plus add back Rising Star Challenge offered for 4-, 5-, and 6-year-old horses. Frederick Magazzeni rode two horses in the Rising Star Training Level Test 2 class, Rheiney Day Woman and Razz Ma Tazz. Shannon Dahmer and The King of Rock N’Roll took the blue with a 69.643% while Magazzeni scored a 68.036% with Rheiney Day Woman to secure second place and a 65.179% with Razz Ma Tazz to take the third slot in the class.

Magazzeni said Rheiney Day Woman, a 4-year-old mare, competed in only the second test of her career in the class. “She’s been wonderful and very quiet,” he said. “She seems to have just been born with an understanding that she’s here to be a show horse.”

For more information, go to www.coloradohorsepark.com.

Tentative Schedule:
Friday – Sunday: Unofficial Times will be mailed to all exhibitors prior to the show, and will be available on www.cornerstonedressage.com. Official times will be posted every morning one hour before the first scheduled ride.

Helmet Reminder: Effective April 1, 2013, for dressage: Anyone mounted on a horse must wear protective headgear.