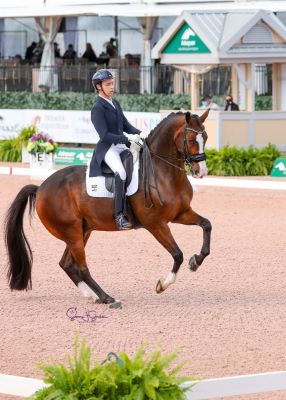 Israeli Sahar Daniel Hirosh and his longtime partner Whitman made history on Monday March 8th as the first ever Israeli dressage partnership to be invited to the FEI Dressage World Cup Final in Sweden this spring. He’s had a banner year this season in Wellington, and at 18 years old, Whitman has never been in better form. The total cost of overseas travel for horse and rider, especially factoring in quarantine procedures and costs to ensure both are safe from COVID-19 and the EVH-1 virus, will top out at close to $40,000.

Sahar’s generous sponsors and Whitman’s owners Salomon & Jane Suwalsky have already put up $10,000, and the FEI will be covering some costs. Sahar was totally surprised to be invited and so he’s humbly asking for your help to cover any costs and make this dream a reality.

He knows it is a tough time to be asking for donations, but even the smallest amount will be much appreciated any anything not required to fund his trip to Goteborg will be donated to the ASPCA to benefit horse, cat, and dog rescues.

Be a part of Whitman and Sahar’s journey to the top of the sport, and help send the first Israeli team to the World Cup Final.

Huge thank you to anyone who has or will support Sahar, especially Salomon & Jayne Suwalsky, the FEI, Whitman’s team of vets and grooms, Equinium Sports Marketing, and the community of riders and trainers in Wellington.

Wellington, FL  (June 27, 2017) — Sahar Daniel Hirosh and Whitman notched a first place finish in the Grand Prix at the Gold Coast Summer Solstice in Wellington, Florida this past weekend — marking their first foray together on a path toward the 2018 World Equestrian Games (WEG). In their competitive debut as a horse-and-rider combo, the pair earned the blue ribbon with a 70.00 percent, propelling Hirosh one step closer to realizing his dream to ride for Israel at the WEG. The Israeli-born Hirosh is an American citizen poised to seize the unique opportunity to bring glory to both countries.

He began preparing the 2003 KWPN gelding (Rhodium-Camora, Saluut) owned by Jane Suwalsky for competition this year at the beginning of the winter equestrian festival show season in Wellington, Florida.  Hirosh met Sulwalsky for the first time as when he was as a child in Israel.  “Jane used to live in Israel and when I was a child I was lucky enough to meet her there. She was one of the people who influenced the development of dressage in Israel. She is an extremely knowledgeable horsewoman who has taken horses up to Grand Prix and it’s amazing to ride for someone I respect so much,” Hirosh shared.

Hirosh had as much praise for Whitman as he did for his owner. “The best part of the test was how much he was with me,” Hirosh said. “The harmony. Whitman is an amazing horse. He took me out there and he did everything I asked. He’s hot, yet light. He doesn’t question what I ask. I think he was made for me.”

Now the duo is heading north to New Hope, Pennsylvania, where Hirosh hopes to continue garnering successful scores at Saugerties and Dressage at Devon.  “The goal is the World Equestrian Games and anywhere we can go, including the European Championships,” he said. “The sky is the limit.”

Hirosh also plans to compete Don Daiquiri, a 2002 Oldenburg gelding (Don Cardinale-Neastate III, Rubenstein I) owned by Beth Palmgren, in the Grand Prix at Saugerties and Devon and aim him for the 2018 World Equestrian Games, as well.  In addition, he rides Sakramenter (Samarant, Sandro Hit, Westminster), an Oldenburg gelding owned by Karen Ramsing-Bixler.

His formula of taking the time behind the scenes to ensure the horses are poised and well prepared before they go down centerline is a recipe for success. Not only does he have a proven formula, but Hirosh knows it takes a team to help him achieve his goals, including the owners of his horses and his sponsors.  “I have amazing owners in Jane, Beth and Karen and wonderful sponsors,” Hirosh added.

Hirosh’s sponsors also helped him display his patriotism on his debut Grand Prix ride on Whitman. Custom Saddlery and KEP Italia helmets designed special tack and gear with Israeli colors and designs. Custom Saddlery created a saddle with the blue of the Israeli flag on the seat and trimming cantle of the saddle. Beth Haist of The Horse of Course introduced Hirosh to KEP Italia helmets and worked with the international company to design a helmet sporting the Israeli flag.

While blue designs begot blue ribbons for Hirosh, there was also a lot of craftsmanship to make sure the equipment not only looked the part but also was the epitome of functional. Custom Saddlery’s expert saddle fitters worked with Hirosh to be certain that the saddle fit perfectly, including making the knee rolls “in just the right spot” to create the best communication between him and Whitman.

Another sponsor, Premier Equestrian, installed the world-class footing in the arena in Pennsylvania where Hirosh will train again this summer.  The company also bestowed the honor of Premier Equestrians to Hirosh for his display of sportsmanship and his commitment to always put his horses’ needs to the forefront over his own.

One thing is certain: Hirosh has surrounded himself with a top team as he launches on the journey to bring pride to Israel in the 2018 World Equestrian Games. “It is said, it takes a village,” said a happy Hirosh after the first show, “but I feel lucky enough to have nations of support for this exciting endeavor.” Hirosh is now settling horses into their northern training stable in Pennsylvania and picking up their training regimen right where he left off in Florida a week ago under blue skies. To learn more about Hirosh and the horses and their Journey to the World Equestrian Games, go to www.sdhdressage.com, and follow him on Facebook at www.facebook.com/sahar.hirosh. 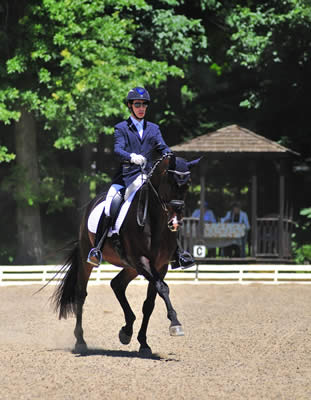 Bedminster, NJ (June 24, 2014) – A new partnership began with a bang during the Dressage at the Ranch National show in Bedminster, New Jersey, where Grand Prix rider and trainer Sahar Daniel Hirosh and Sakramenter put in their debut performance as a team. The 8-year-old Oldenburg gelding by Samarant (Sandro Hit) and out of Weiha Cara (Westminster) received an 8 for gaits and Hirosh received an 8 for the rider’s correct an effective use of the aids to boost them to an even 70% in Fourth Level Test 1.

Owned by KCR Dressage, LLC, the 17.2 dark bay gelding only arrived at Hirosh’s barn a few weeks ago, and he couldn’t be happier with their first outing. The judge praised Sakramenter, awarding him 8s for overall gaits as well as specific movements, and calling him an “impressive horse with much talent for the higher levels.” And that is just where Hirosh is aiming him.

“I am very excited about working with this horse,” said Hirosh, who rides for Israel. “My goal is to channel his willingness to work and exceptional talent into the international arena.” Hirosh just finished off a successful winter season at the 2014 Adequan Global Dressage Festival, where he finished with impressive scores and top placings across a wide variety of classes, from the USEF 4-Year-Old Division to the Intermediate B and Fourth Level with his string of up and coming dressage horses.

Following Florida’s winter circuit, Hirosh and his horses returned to their summer base in Pennsylvania, and continued their winter winning ways in the spring. In May he and Lisa Grossi’s Hanoverian mare D’Esprit Joli finished with an impressive overall score of 80.4% at the Bucks County Horse Park Dressage show in the USEF 4-Year-Old class, and he also rode Francis Murphy’s 8-year-old warmblood Aragon to a 71.8% in the Prix St. Georges. Aragon’s score also secured them the FEI high score of the show.

With a history of bringing young horses to the FEI levels, Hirosh now will aim to repeat that success by guiding Sakramenter into the international show arena. USDF Gold and Silver Medalist and owner of KCR Dressage, LLC, Karen Ramsing-Bixler, was thrilled with the new team’s success in New Jersey. Sakramenter is one of four quality dressage horses currently owned by KCR Dressage, which is dedicated to importing and training European sporthorses for the American market and international competition. With over 20 years of competing in the FEI arena, Ramsing-Bixler will often be seen ringside acting as eyes on the ground and sometimes co-trainer for her horses. Early in her dressage career, Ramsing-Bixler apprenticed for seven years with Jessica Ransehousen in all phases of dressage: competing, teaching and judging. “Working with Jessica gave me a unique insight and sharp vision for the future of dressage and the necessity of developing horses for the American rider,” said Ramsing-Bixler. “My goal is to play a part in this and I am very happy to be an owner and share in someone else’s dream.”

Pairing Sakramenter with Hirosh’s proven system of bringing horses up the levels meshes well with KCR’s goal of taking European sporthorses into international competition. “The plan now is to continue to build Sakramener’s strength and confidence in the arena,” said Hirosh. “He has so much potential and I could not be more grateful to Karen and KCR Dressage for entrusting his training to me. I’m very excited for what the future holds for us.”