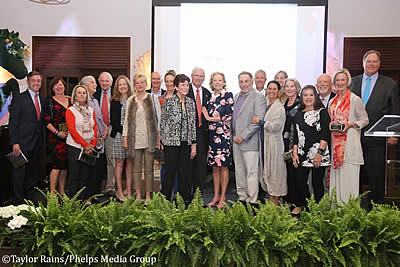 The United States Equestrian Team (USET) Foundation is pleased to recognize the generous support of their Gold Medal Club (GMC) members. The GMC is the lifeblood of the USET Foundation, accounting for nearly 80 percent of individual contributions each year and is comprised of members who contribute a minimum of $1,000 or more annually. On Friday, Jan. 18, the USET Foundation hosted the Gold Medal Club Reception at the International Polo Club in Wellington, Florida, where GMC members who have made the USET Foundation a priority in their charitable giving for 10, 15, 20, 25, 30, 35, and 40 years were recognized.

The USET Foundation is pleased to honor the talented young show jumping athlete Daisy Farish of Versailles, Kentucky as the recipient of the 2019 Lionel Guerrand-Hermès Trophy. This prestigious award is presented annually to a junior/young rider in one of the Olympic disciplines who demonstrates the team’s values of sportsmanship and horsemanship.

The USET Foundation is pleased to announce that dressage star Laura Graves is the recipient of the 2019 Whitney Stone Cup. The award is presented annually to an active competitor who displays consistent excellence in international competition as well as high standards of sportsmanlike conduct, while serving as an ambassador for the United States and equestrian sport.

In 2015, the USET Foundation announced the creation of the R. Bruce Duchossois Distinguished Trustee Award in honor and recognition of the late Bruce Duchossois. On Friday, Jan. 18, S. Tucker S. Johnson was presented with the 2019 award during the USET Foundation’s Gold Medal Club Reception held at the International Polo Club in Wellington, Florida.