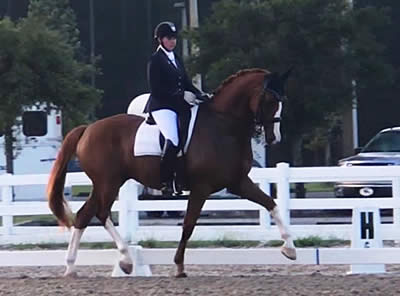 Jacksonville, FL (September 7, 2018) – With the summer months coming to an end the Jacksonville Equestrian Center is gearing up for the fall schedule which started out with the Southeast Horse Shows Ride Lite Dressage Show on September 1st and 2nd. The Jacksonville Equestrian Center offers everything aspiring dressage riders and their equine partners need to have an enjoyable competition experience, including well-groomed outdoor rings, a 123,000 square foot indoor arena, and over 400 permanent stalls.

Over the two days of competition, rider Jodie Kelly-Baxley had stand out performances, earning scores of 70.152% and 72.692% at Third Level. Kelly-Baxley rode her own mount Grayton Beach to victory. Grayton Beach was one Kelly-Baxley’s ten horses at the show with her over the weekend. “We love coming to the Jacksonville show! We make our show schedule around it… it is a convenient location for most of my clients and me, and the stabling is good,” said Kelly-Baxley of her experience at the Southeast Horse Show Ride Lite Show and the Jacksonville Equestrian Center.

Kelly-Baxley was quick to note just how wonderful show manager Carlie Evans is. “The main reason we are attracted to this show is because it is run so well. Carlie is a scheduling genius, and I had ten horses here – pretty amazing.” Show Manager Evans was busy over the weekend but was very complementary of Jacksonville Equestrian Center Executive Director, Tim Jones. “The footing was great and Tim Jones is very professional and he really knows footing and how to work it.  We are very excited for the future expansion coming to the equestrian center.”

For more information about the Jacksonville Equestrian Center, visit www.jaxequestriancenter.com. 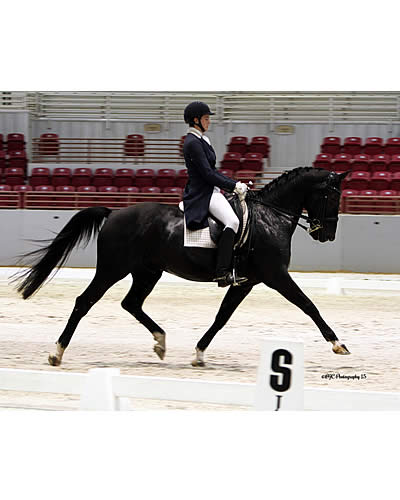 Jacksonville, FL (September 15, 2015) – When 74-year-old Celia Evans, her daughter, and granddaughter drove through the gates of the 80 acres of equestrian paradise known as the Jacksonville Equestrian Center, it was for the same reason that Grand Prix dressage rider Anna Marek also arrived at the facility: the chance to compete for a blue ribbon in the sport that they love. The Jacksonville Equestrian Center in Jacksonville, Florida hosted the Ride Lite Dressage Show this month, offering a first-class showing experience to the dressage community.

Showing at the Jacksonville Equestrian Center was especially exciting for Ride Lite Dressage competitors, as they were some of the first riders to ever enjoy the facility’s newly installed footing. “The new footing in all the rings was very well received – everyone loved it,” commented Carlie Evans of South East Horse Shows, the organization that put on the Ride Lite Dressage Show.

Anna Marek claimed first place in the Grand Prix both days of the competition, aboard her own Unico G – a fourteen-year-old KWPN gelding (Negro x Animo). The pair rode out of both Grand Prix classes as champions with a high score of 73.20 percent. Marek is based out of Williston, Florida, at A. J. Stapleton’s Top Brass Farm, and trains with Anne Gribbons.

“My favorite thing about ‘Nico’ is that we have grown up together, made mistakes together, and had a lot of success together,” Marek said. “I owe so much to this horse. He holds a huge place in my heart!”

Marek was thrilled with the show’s convivial atmosphere and the staff. “The best part about the competition is the wonderful staff and friendly competitors,” Marek said. “Everyone seems genuinely happy for one another. Carlie Evans puts on shows that we want to come back for! I love showing at the Jacksonville Equestrian Center. The stabling is very well thought out and convenient, and the indoor is a nice escape from the heat in the Florida summer.

“It is well planned out,” she said. “The layout is nice, and the indoor coliseum-type arena is very comfortable to ride in. There’s been a lot of thought about everything that went into it, and the footing is phenomenal.”

The Jacksonville Equestrian Center was happy to host the Ride Lite Dressage competition, and looks forward to upcoming events such as the Southeast Medal Finals hunter, jumper, and equitation competition later this week. The Jacksonville Equestrian Center has served the equestrian community and the local area for ten years. It features not only new footing, but also a giant indoor arena, outdoor show rings, and more than 400 stalls. Located at 13611 Normandy Blvd., in Jacksonville, Florida, the multi-faceted center hosts a variety of events from equestrian and recreational, to sporting and community events. For more information about upcoming events at the center, visit www.jaxequestriancenter.com or call Penny Gorton at 904-573-3649.