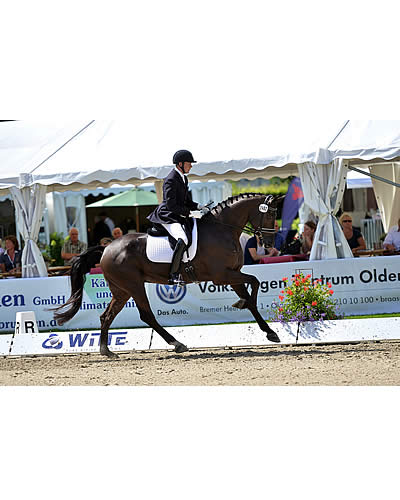 Oldenburg, Germany (July 23, 2015) – American Grand Prix dressage rider Endel Ots has shown how prepared he is for the FEI World Breeding Dressage Championships for Young Horses this August. Ots and Lucky Strike claimed the first win of the 2015 Oldenburger Landesturnier, or “Oldenburg Championships,” on Tuesday in the FEI Five-Year-Old Einlaufprüfung, or “opening competition.”

“Today’s competition was so much fun,” said Ots after winning his first-ever European competition. “It was a super atmosphere. This is a perfect lead up to the World Championships in Verden.”

Ots will be competing Lucky Strike and six-year-old Oldenburg gelding Samhitas in the FEI World Breeding Dressage Championships for Young Horses in Verden, Germany in August. The 2015 Oldenburger Landesturnier is part of his final preparations for Verden. Only one other American has ever qualified both a five-year-old and a six-year-old for these renowned championships.

Endel Ots and his father, Max Ots, own Lucky Strike, a German-bred five-year-old Hanoverian gelding (Lord Laurie x His Highness). Ots originally discovered Lucky Strike in Belgium and has owned the impressive gelding for nearly two years. “He is the only qualified five-year-old in the U.S. for Verden,” Ots explained, proud of his young partner.

“I want to give a huge thank you to Evi Strasser for her help all season, and for organizing my stay here in Europe,” Ots said. “Evi Strasser has been helping me every step of the way.” Ots also noted his appreciation for Hans Heinrich and Kathrin Meyer Zu Strohen who have hosted Ots during his European stay and Viola Abrahams for coaching at this week’s competition.

Ots also credits United States Young Horse Coach Christine Traurig. Although the two have only been working together for about a month, Traurig’s coaching has been invaluable to Ots. “There will be great things in the future for the young horses in the USA under Christine’s guidance,” he said. Traurig was in Hagen, Germany serving as Chef d’equipe for the U.S. Nations Cup team when Ots arrived in Germany earlier this month to begin preparing for competition. “I changed my plane ticket around, and when Hagen was over I went to work with Endel,” Traurig explained. A video of Ots and Lucky Strike schooling in Germany with Traurig can be found at https://www.youtube.com/watch?v=3xCZphgsa_k&feature=youtu.be. “Since then, we have been in communication almost daily about how the horses are doing,” Traurig continued.

“When Endel called me and gave me the news that he and Lucky Strike had won the class at the Oldenburg Championships, I was of course super excited! He went to this prestigious show as an American, showed up, did his test, and won the class. I think that’s a remarkable accomplishment. I’m really excited for him,” Traurig said.

As Ots continues training for the FEI World Breeding Dressage Championships for Young Horses in Verden, Traurig’s advice for him is simple. “I said to him, just stay in the zone. He knows his horses and he knows what he can accomplish in the ring – he is a very good rider. My advice to him is to not think that he has to change something drastically to make another big difference in his performance. His performances were already super getting him to Verden – if they weren’t, he wouldn’t be going there!” she smiled. “He has done a very fine job getting his young horses to the point where they have the quality to go to Verden and compete well there. He has proven himself to be successful.”

Traurig will be at the FEI World Breeding Dressage Championships for Young Horses to cheer on Ots as he represents his country.