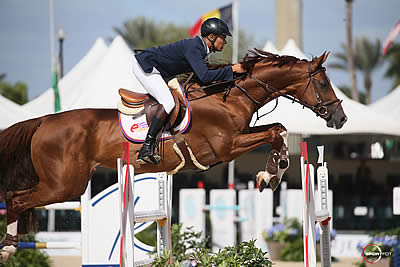 Wellington, FL – January 9, 2020 – Marcelo Ciavaglia’s Winter Equestrian Festival (WEF) debut got off to a strong start on Thursday, January 9, as the Brazilian rider earned a victory in the $35,000 Equinimity WEF Challenge Cup Round 1 at the Palm Beach International Equestrian Center in Wellington, FL.

Ciavaglia and his longtime mount, Conto, were the very first of 44 entries to contest Thursday’s featured class. As the first of nine entries to qualify and return for the Eric Hasbrouck-designed short course, the pair would prove uncatchable. They posted a double-clear time of 35.069 seconds to secure them the win, while second place with a time of 35.838 seconds went to the USA’s Kristen Vanderveen and Bull Run’s Almighty, owned by Bull Run Jumpers Six LLC. Rounding out the top three was Canada’s Jonathon Millar who rode Valinski S, owned by Wyndmont, to a clear time of 36.006 seconds.

Two champions were named in the 3’6” Green Hunter division, presented by Equine Tack & Nutritionals, during opening week of WEF. Section A champion was awarded to Christopher Payne of Cincinnati, OH riding Solitude with champion honors for section B going to Kate Conover of Ocala, FL on Heaven’s Dream.

Payne and Solitude, a 7-year-old gelding owned by Northernside LLC, earned three first-place ribbons to secure the championship. “He’s such a natural athlete,” commented Payne. “You get him in striking range of the jump and he gives you such a beautiful effort every time.”

Payne is currently showing the gelding, who was imported in the spring of 2019, to get him ready for owner, Beth Bidgood, to ride in amateur-owner hunter competition at WEF. “She’s being nice and letting me do him for the first few weeks to get him settled in at the new height and have some fun.”

Conover and Heaven’s Dream also proved to be consistent against tough competition, earning two first-place ribbons and a fifth.

This was a special ride for Conover, who originally imported Heaven’s Dream, and was able to catch ride the horse for owner Isabella Griffin. “It’s really cool to see horses show here [at WEF] that you found in Europe and put with good customers,” said Conover. “But it’s also really exciting that I get to ride them as well!”