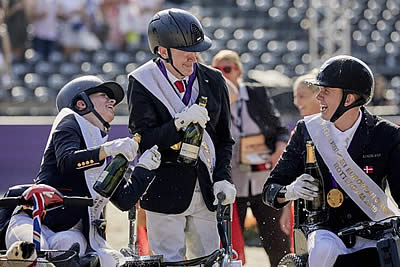 Great Britain’s Georgia Wilson topped off a stellar introduction to major international competition taking gold in the Freestyle at the Longines FEI Para Dressage European Championships in Rotterdam (NED). The win comes after her silver medal in the Grade II individual test.

Riding Midnight she scored 78.187% to take the win ahead of Austria’s individual champion Pepo Puch and The Netherlands Nicole den Dulk. Puch, riding Sailor’s Blue, scored 77.220% for the silver with den Dulk on Wallace N.O.P. taking bronze with 74.313%.

An emotional and elated Wilson said: “The silver medal hasn’t even come into my head yet I don’t know if I’ll cry at my medal ceremony, but I hope not. I’ve not had the easiest time in riding with different horses but basically you have to keep going and get the right coach.

Denmark’s Tobias Thorning Joergensen added a second gold to his tally by winning the Grade III freestyle. Riding Jolene Hill, the 19-year old scored 79.093%, with The Netherlands’ Rixt van der Horst second, on Findsley N.O.P. with 77.327%.  A second bronze of the week went to the side-saddle rider Barbara Minecci from Belgium. She rode Stuart and scored 73.127%

It wasn’t just a day for the newbies. A member of the sport’s older guard continued his spectacular come back in the shape of Norway’s Jens-Lasse Dokkan. He added the Grade I freestyle title to the individual he picked up earlier in the week scoring 80.193% on Aladdin (the highest score of the week). Italy’s Sara Morganti and Royal Delight were second with 79.273%. In a repeat of the individual test’s running order, Latvia Rihards Snikus claimed his second bronze medal on King of the Dance, with 77.387%.

Dokkans, who hasn’t won a major medal since 2010’s FEI World Equestrian Games™, and who has appeared at every Paralympic Games since the sport debuted in 1996, said: “We’ll have a big celebration dinner but first I have to fly home and then have a long drive. I’m looking forward to sleeping in my own bed though and dreaming about this week.”

Picking up his third gold of the week, the Grade V freestyle, The Netherlands’ Frank Hosmar joked: “Now I know how it feels to be British.” Riding Alphaville N.O.P. (in their eighth consecutive European, World, or Paralympic championships) he scored 79.900%, leaving Great Britain’s Sophie Wells and C Fatal Attraction in second place again with 78.375%. In another repeat of the individual competition, Belgium’s Michele George picked up bronze on Best of 8 with 74.720%.

Final honours of the day went to The Netherlands again, when Sanne Voets won the Grade IV freestyle on Demantur Rs2 N.O.P. scoring 79.720%. Sweden’s Louise Etzner Jakobsson improved on her individual bronze by taking silver on Zernard with 73.775%, swapping places with Belgium’s Manon Claeys. Riding San Dior; she scored 73.355% for the bronze.

Voets’ win, on the back of her three golds at last year’s FEI World Equestrian Games™, makes her a member of a unique para dressage club, the owner of a double set of consecutive triple gold medals from major championships. Great Britain’s Sophie Christiansen was the last person to achieve that feat after the London 2012 Paralympic Games and the 2013 Europeans in Herning (DEN). “I’m happy,” Voets said. “It’s hard to be the favourite and the hardest part is the pressure you put on yourself. I was amazed by the atmosphere. It’s been an amazing week and I’m going to enjoy every second of the medal ceremony.”

At the end of an enthralling para dressage competition the Dutch topped the medal table with five golds, two silvers, and two bronzes. Denmark took the second spot with two golds and a bronze, with Norway close behind with two golds. Great Britain were fourth with their gold, and four silvers.

With exactly one year to go to the opening ceremony of the Tokyo 2020 Paralympic Games, the week will be remembered most of all though for the incredible performances by the home squad, the emergency of some new para dressage stars, and the return of one of the greats.