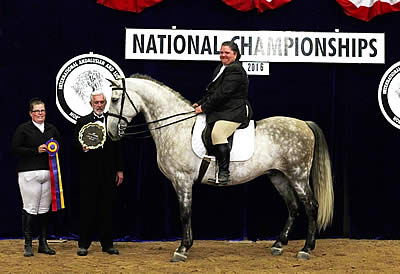 “The IALHA National Championship Show has such a positive vibe,” commented Hansen. Her bright personality was appreciated by her fellow competitors on more than one occasion during this year’s competition. For each of the classes, there are specific pieces of equipment that each horse and rider are required to wear. Hansen explained that a fellow rider forgot her required chaps, and was going to have to miss her chance to ride for a championship. Hansen stepped up and offered the chaps she was wearing. “Her class was right after mine. The minute I got out of the class, I just sat down, ripped off my chaps and put them on her. It was really cool to be able to share.” Later in the day, another rider wasn’t wearing a broach and was going to be held out of the class. Hansen noticed the conversation happening and offered the broach she was wearing, saving the day for another competitor.

Additionally, Hansen was extremely proud of her two mounts. “Not only are they beautiful horses and kind of fancy, but they are so, so smart,” said Hansen. “Padre has overcome so much. It is super fun competing on him. He was like a little show pony at the Nationals.” Hansen has been working with Cora since she was a foal. Of their work together, Hansen remarked, “It’s really fun. When Cora sees a pole on the ground, she knows she is supposed to go sidepass. I really love the intelligence that they show.”

Premier Equestrian wishes for all disciplines of riders, such as Hansen, always have an enjoyable experience with their horses, in or outside the show ring. The company is proud to offer an affordable choice for first-rate American-made products that enhance the equestrian performance of its customers. For more information about Premier Equestrian and its full line of products including footing, dressage arenas, and horse jumps, visit www.PremierEquestrian.com or call 1-800-611-6109. 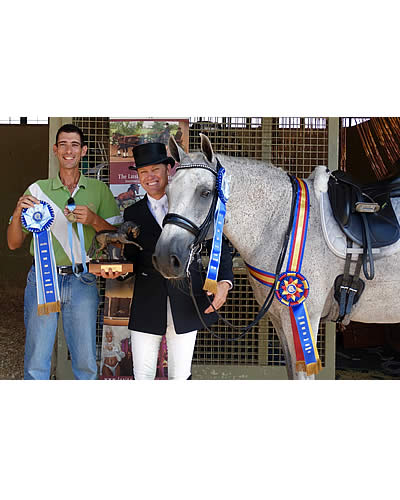 As a tribute to the horse’s winning disposition, Zerbino and Yeager’s six-year-old son Ethan won in the Exhibition Leadline Class Riders 8 Years Old and Under class. It was the young Yeager’s first time competing, and Robb said the youngster was ecstatic with his win.

“Interagro specifically breeds for performance and disposition, and he shows that,” Robb proudly said of Zerbino. “He is a different horse in the Grand Prix with me than he is with a leadline class with six-year-old Ethan. He really does the full gamut, from being a very up horse and doing his job at the highest levels, and then becoming a kind schoolmaster for the very youngest rider.”

As a former die-hard Warmblood fan, Robb said she never expected to fall in love with her gray Lusitano – but he quickly won her over. “If anybody told me five years ago I would be riding Lusitanos, owning several Lusitanos, and going to the IALHA Nationals, I would have said, ‘You need to get a new crystal ball!’ But, indeed, they would have been right, and it’s such a joy,” she stated.

Robb not only thanks Peter van Borst of Interagro Lusitanos for introducing her to Zerbino, she also lists a team of trainers, vets and other professionals for helping her along the way. “It really takes a village,” she said. “I’ve had the pleasure of working with three excellent trainers in Kerensa Muller, John Zopatti, and Jaime Amian. I also have to give credit to Zerbino Interagro’s farrier Jim Crew. I’m also thankful to Laura King, the eminent hypnotherapist, who really helped me overcome some of the issues that were in my subconscious. In addition, the Knopp family invited me to train for the summer at IDA Farm in Wellington. Having the covered riding arenas and all the world class amenities including a TheraPlate and Horse Gym treadmill –really helped our fitness and socially it was so much fun there”.

Robb said that her bond with Zerbino, whom she calls ‘Zill’ (short for ‘Zillionaire’), is strong. “Having a horse like this, with a heart like this, and with the ability and training he has, makes me feel like I’m a zillionaire, too,” she said.

Robb has a word of caution for anyone interested in Lusitano horses, and especially those bred by Interagro. “My advice to anyone who starts with these horses is to beware,” she said. “They’re kind of like potato chips. You can’t just have one.”

Interagro is the largest breeder of Lusitano horses in the world, with 40 years of experience breeding Lusitanos. Interagro Lusitanos is committed to preserving the pure bloodlines of the Lusitano breed, and producing star horses like Zerbino Interagro. Interagros own bloodlines include some of the most respected of the breed: Faraó (JHC), Nirvana Interagro, Ofensor (MV), Xique-Xique (CI), and Yacht (SA). Lusitanos from the Brazilian farm have excelled in top world show rings and have graced the covers of international magazines over twenty times. Interagro is one of the most accessible and respected breeders in the world. To learn more, visit www.interagro.com.br. 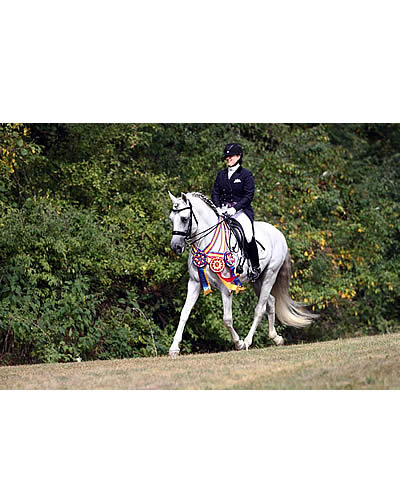 A decorated athlete, Hielo Mor represented his Spanish bloodlines at past IALHA National Championships, earning accolades such as the title of Junior Colt Champion and the Best Movement award. He also trained for four years with two time Swedish national dressage team member and five time U.S. National Champion Mette Rosencrantz, of Mill Creek Equestrian Center in Topanga, CA. Since then he has relocated to train with Nicole Harrington of Harrington Dressage in Loveland, OH. In the Andalusian/Lusitano Best Movement class at the 2015 IALHA Nationals, the stallion was shown in-hand by John Rock of Big Rock, IL.

“He’s a beautiful, sweet, great stallion with three exceptional gaits,” McDowell said. “He comes from bloodlines that make him so correct, he’s just naturally built for movement. His free-hand walk is a nine, his trot has a lot of reach, clearance, and height, and his canter just floats.”

The Vita Flex Victory Pass Award recognizes the fine line between good and great by saluting winning examples of exceptional horse care and performance like McDowell and Hielo Mor.

Campaigning a breeding stallion, in-hand or under saddle, requires a top care in stride with high performance. Vita Flex offers a variety of performance products that encompass anything top equestrians in all disciplines could want for their horses while competing for first place. The Lactanase® product provides ingredients that support the production of cellular energy, making it essential for high performance horses. Another Vita Flex favorite, the AccuLytes™ Balanced Electrolyte Formula, supports horses by replenishing lost electrolytes from long trailer rides, stress, and exercise.

Vita Flex provides riders, trainers, and owners with top-quality equine products including antioxidants, electrolytes, vitamins and minerals, and topical solutions to help keep horses in peak health, and supports some of the most popular breed shows and competitions in the world. To learn more about the Vita Flex® line of superior horse products, visit www.vitaflex.com or call (800) 848–2359. 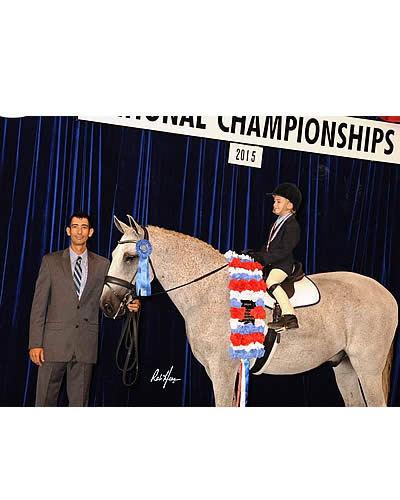 Yeager and Icaro XXIV, a Spanish/Portuguese gelding owned by Martha Ann Lott, notched the National Championship win in the Specialty Halter Spanish/Portuguese Gelding class. Yeager and Zerbino Interagro, a twelve-year-old Lusitano gelding bred by Interagro Lusitanos of Brazil and owned by Johnny Robb, placed in the top five in the USDF Dressage Sport Horse Prospects In-Hand class with a 70.600 percent and captured the Best Movement Award in the National Championship Senior Gelding 4 Years and Over class. Yeager also earned the Reserve National Championship title in the National Grand Championship Andalusian and Lusitano Sr. Stallions 5 Years and Over division, with 2007 PRE stallion Oleado, owned by Lena Davis. Yeager handled Oleado for the in-hand portion of the division, and Shelley Van den Neste of Sunrise Farms Sport Horses competed Oleado in the under saddle portion.

Yeager, a second-generation horseman and trainer, began showing Arabians at the age of five, and his six-year-old son Ethan Yeager is now following in his footsteps. Despite Gary Yeager’s impressive show record at the IALHA National Championships, his proudest moment overall throughout the competition was when his son was named National Champion in the Exhibition Leadline Riders 8 Years and Under class on Zerbino Interagro. “He had never even been on that horse before this show,” the elder Yeager said.

Gary Yeager has claimed hundreds of National Championship titles throughout his career while showing a variety of horse breeds. He trains and teaches out of Topsail Farm, located near the HITS show facility and The Sanctuary Equine Sports Therapy and Rehabilitation Center in Ocala, Florida.

Yeager owns Yeager Equine Services (YES) in Ocala, Florida. “We specialize in all forms of driving from competitive combined driving to the pleasure ring to the breed ring as well as three-day eventing and halter for the confirmation class,” said Yeager about his full-service training facility. “It has all been so rewarding, and Yeager Equine Services has garnished numerous Grand National champions in-hand and in driving, as well as coaching top amateurs and juniors to national titles.”

Yeager has served many clients from all breeds and disciplines who have “just said Y.E.S” to his training program and experience. Next, he will be heading to the Arabian Sport Horse National Championships on September 15-20 at the Governor James B. Hunt Sports Complex in Raleigh, North Carolina, and then on to Kentucky for The National Drive on October 6-11 at the Kentucky Horse Park. To learn more about Gary Yeager, like his Facebook page at https://www.facebook.com/gary.yeager.10.