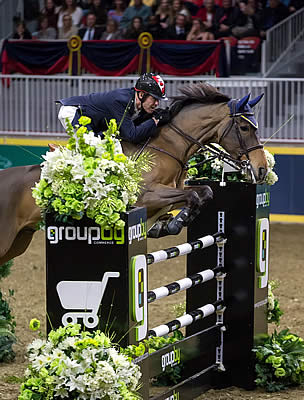 Millar returned last in the second and final round of the Greenhawk Canadian Show Jumping Championship on Saturday night, having posted the fastest clear in Friday night’s opening speed round riding Dixson.  Millar and the 13-year-old Belgian Warmblood gelding owned by Susan and Ariel Grange of Cheltenham, ON repeated their flawless performance in Saturday’s two-round final over tracks set by course designer Bernardo Cabral of Portugal.

“It’s a lot of stress, that final round!” said Millar, 69, who has now claimed the national title a total of 12 times in his illustrious career.  “There’s no room for error, and that’s what jumping it is all about.  There was no option but to do what Dixson did.”

Saturday night’s victory marked an impressive comeback for Dixson after two sinus surgeries sidelined him earlier in the year and ultimately kept Millar from competing at the 2016 Rio Olympic Games.

“In the years that I’ve been riding him, I’ve never jumped him indoors, but it was not an issue for him,” said Millar, who last won the Greenhawk Canadian Show Jumping Champion in 2014 riding his London Olympic mount, Star Power.  “It’s great to have this quality of horse here at The Royal because we’ve got some serious competition coming at us next week in the international division.”

Having returned to competition in August, Dixson was back at the top of his game, holding off Mac Cone, 64, of King City, ON.  For the second year in a row, Cone earned the Reserve Championship title riding Gasper van den Doorn for owner Chadburn Holdings, Inc.  The pair finished on a combined total of 1.73 penalties carried forward from Friday night’s speed phase, and joined Millar as the only other horse-rider combination to leave all the rails in place over three rounds of competition.

Having finished second and third behind their father on Friday night, Jonathon and Amy Millar, both of Perth, ON, remained in the top five following the final phase of competition.  Jonathon Millar and Bonzay, owned by Isotropic investments, finished on 4.46 penalties for fourth while Amy Millar incurred 8.42 penalties to place fifth riding Heros, owned by AMMO Investments.

Based on their performances in the Greenhawk Canadian Show Jumping Championship, Cone and Moffatt move forward to the international division, beginning Tuesday, November 8.  They join fellow Canadians Tiffany Foster of North Vancouver, BC, Keean White of Rockwood, ON, Vanessa Mannix of Calgary, AB, Erynn Ballard of Tottenham, ON, and Ian and Jonathon Millar, who were all pre-qualified based on their world ranking.

Tickets for the Royal Horse Show can still be purchased by visiting royalfair.org or ticketmaster.ca.

For more information on the Royal Horse Show, the marquee event of The Royal Agricultural Winter Fair, visit royalfair.org/horse-show.