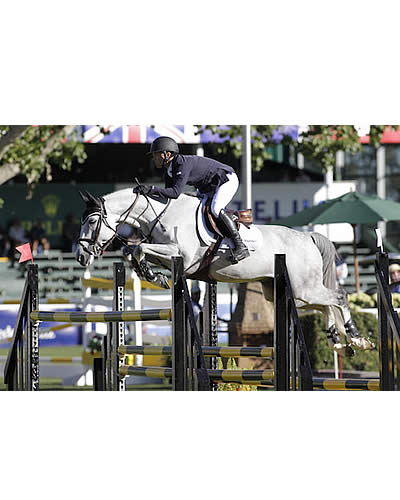 Calgary, AB, Canada – September 11, 2015 – An exciting evening of international show jumping took place complimented by equestrian exhibitions, live music and a dazzling display of fireworks during the Mercedes-Benz Evening of the Horse Friday night at the Spruce Meadows ‘Masters’ Tournament.

It was a packed house to watch many of the world’s best horses and riders compete in the evening’s events, which included the second win of the week for Kent Farrington (USA) and Uceko in the $210,000 Tourmaline Oil Cup 1.60m. The $75,000 ATCO Electric ‘Circuit’ Six Bar was held later with a victory for Edwin Smits (SUI) and Rouge Pierreville over four rounds of competition.

The ‘Masters’ Tournament features five days of competition through Sunday, September 13, with highlights including Saturday’s $300,000 BMO Nations’ Cup and Sunday’s $1.5 Million CP International, presented by Rolex. One of the most prestigious grand prix events in the world, the CP International is part of the Rolex Grand Slam of Show Jumping, where Scott Brash (GBR) will attempt to become the first rider to ever take the Grand Slam title. Brash already made history by winning two consecutive legs of the challenge with victories at CHI Geneva in December followed by a second victory at CHIO Aachen a few months later. An unprecedented €1 million in bonus money is on offer to any rider who can win all three grand prix events in succession.

Venezuela’s Leopoldo Palacios set a difficult track for the horses and riders in Friday’s $210,000 Tourmaline Oil Cup. Out of 26 entries, no one was able to clear the course without fault. The win went to Kent Farrington and RCG Farm’s Uceko with one time fault in 80.66 seconds. Tiffany Foster (CAN) finished second with the fastest four-fault round riding Torrey Pines and Artisan Farms’ Victor in 78.31 seconds.

“The course was very big,” Farrington remarked on the lack of clear rounds. “That was as big as a 5* grand prix that we jump anywhere. I also think a lot of people did not have their top horses in there. The size of the course was quite big for the Friday class, but Uceko is a legitimate grand prix horse, so I think I had the right weapon today. It was a serious course with a very tight time allowed.”

Elizabeth Gingras (CAN) and Gingras Equestrian Ltd.’s Zilversprings placed third with four faults in 78.43 seconds. Scott Brash (GBR) also had one rail down with Hello Forever, owned by Lord and Lady Harry and Lady P Kirkham, to place fourth in a time of 78.52 seconds.

“I didn’t know if I was going to win because I never like to be that presumptuous, but when you look back at that course, Leopoldo would have been lucky to get one clear maybe. If there is a strong group of riders in there, somebody is going to pull it off usually. I was lucky to get away with it today; I was worried I was going to be crying all night with that time fault.”

With two wins for the week, Uceko will now have a well-deserved vacation. Farrington was thrilled with the horse’s performance and praised his mount, a 14-year-old Dutch Warmblood gelding (Celano x Koriander).

“He is an exceptional horse and he really likes to jump on big grass fields, so I try to use him heavily in those venues,” Farrington detailed. “He is a horse that goes better when he is excited, so I try to keep him really fresh. I give him half the year off every year. He is better when he has a lot of energy, so the more atmosphere a place has, the better he goes. Where a big field or a large crowd intimidates a lot of horses, he usually goes better in that setting.”

Friday night at the ‘Masters’ featured the always-exciting $75,000 ATCO Electric ‘Circuit’ Six Bar competition in front of a fantastic crowd at Spruce Meadows. Thirteen entries started in round one and 11 continued on to round two. Six then qualified for the third round where only three were able to clear the obstacles. Robert Breul (FRA) and Arsouille du Seigneur opted not to continue on and took home the third place prize as Michael Whitaker (GBR) and Edwin Smits (SUI) battled it out in the fourth and final round. Whitaker jumped first aboard Emilie Machon and Michael Potter’s Valentin R, but dropped the top rail of the final fence, which was set at a staggering 1.95 meters. Smits and Rouge Pierreville followed with a perfect round to take victory.

After the prize giving ceremony and round of honor, Smits took in the magnitude of his first win at Spruce Meadows and gave praise to the iconic ‘Masters’ event.

“It is like a childhood dream come true,” he beamed. “I have never had the chance to compete at this level in a place like this. I have been here a few times as a spectator with my wife, who competed here at the Masters. Now finally in the autumn of my career, to come here and compete with the horses that I have, there are no words for what this is. The competition is amazing; all of the details, everything is perfect. We are guests here and we feel like kings. It is just amazing.”

Smits has only ridden Rouge Pierreville, a ten-year-old Selle Francais gelding (Ultimo van ter Moude x Narcos II) owned by Claire Franzoni and Daniel Desforges, for a few months. The rider explained that he saw the horse on video and immediately fell in love and asked to ride him for the owners. Despite the horse’s inexperience, he jumped flawlessly through each round Friday night and fed off the energy of the crowd as the fences got higher and higher.

“The key (to the six bar) is that you need a horse that does not want to touch the poles and wants to jump very big and very high,” Smits explained “This horse has so much scope. He is such a powerhouse. The first day here he was a little green, but he is really learning and I think this is a really big step in his career. I think he is going to go very high in this sport.”

“I think the crowd gives an extra energy to the horses as well,” Smits added. “As riders, it gives us an enormous boost, but for the horses also. They feel the adrenaline go up and they give you even more.”

In addition, Smits had help from show jumper Jessica Kürten Friday night. Kürten currently holds the record for the six bar at Spruce Meadows after clearing 2.12 meters and gave her friend some sound advice heading into the arena.

“She said to just go in and fight. Fight and jump it,” Smits declared with a smile.

With his six bar win, Smits has now qualified for Sunday’s $1.5 Million CP International, presented by Rolex. The qualification also takes some of the pressure off as the rider returns to compete for Switzerland in Saturday’s $300,000 BMO Nations’ Cup. His mount for each of the weekend’s major events will be Copain du Perchet CH, but Smits praised Rouge Pierreville for helping to make his dream of competing in the world’s greatest grand prix come true. The horse will now have a nice break before flying back to Europe.

The ‘Masters’ Tournament continues on Saturday featuring $125,000 Suncor Winning Round 1.50m followed by the $300,000 BMO Nations’ Cup, where eight teams will vie for winning honors. For a complete tournament schedule and full results, please visit www.sprucemeadows.com.