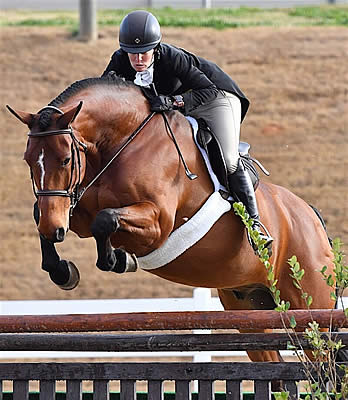 With a name like End Game, you would expect a performance worthy of a mic drop.

And you would have seen impressive sport during Week I of the Atlanta Spring Classics, when Christina Fox made short work of the challenging courses laid in front of her during the Classic Derby. Fox was aboard the aptly named End Game.

Fox, of Aiken, South Carolina, piloted Southland Stables, LLC’s End Game for the challenging two-round class. The pair earned 75 points in the classic round, followed by 83 points in the handy round for an overall score of 158 points.

With a total score of 156 points, Marietta, Georgia’s Grace Ann Nolan was narrowly edged into second place. In the saddle of Donald Stewart’s Agiato, 16-year-old Nolan rode her way to the top classic round score of 80 points and a handy score of 76.

Lee Cesery, of St. Augustine, Florida, ranked third for her score of 151 aboard her own Candidate. Fourth place was awarded to Madison, Georgia’s Katie Kittrell, who piloted Autumn View Farm’s Golden Sun to a total score of 108 points.

The Sidelines Green Hunter division kicked off Week I of the 2018 Atlanta Spring Classics in Conyers, Georgia. And it started with the championship colors for Alpharetta, Georgia’s Carolyn Bell.

In the irons of Debra Rattary’s Toblerone, Bell secured the division title in the Sidelines Green 3’/3’3” Hunter. The duo chalked up a grand total of 36 points.

Kat Mulkey, of Madison, Georgia, was awarded the reserve championship for her performances with Grace Bridge’s Serenade. The pair accrued a total of 28 points.

“I am so pleased with Toblerone,” said Bell. “He is a kind, honest, quiet horse, but he’s also athletic and scopey. This was his third time in the green division, and his second time being champion.”

Toblerone was purchased three years ago by Rattary, with the intention of enjoying the horse at home at the barn, Bell remarked. Toblerone made his show debut this year when a student of Bell’s began leasing him, she said. The nine-year-old hunter prospect has been racking up ribbons ever since.

“I wasn’t surprised at all,” said Bell. “I expected the best from him. When we were in Germany looking at him, we were impressed with his brain — he’s calm, quiet and one of the smoothest horses I’ve ever ridden.”

Bell also ranked fourth overall with her own Ambiance. She said the Green Hunter division provides her up-and-coming hunters with a good solid foundation for a long and successful jumping career.

“The green division is a great place to learn the basics, such as balance and straightness,” she commented. “It provides a solid base, rather than moving up a division because a horse is athletic enough to jump bigger fences.”

With this win, Bell and Toblerone are well on their way up the qualifying charts for the $30,000 Green Hunter Classic, which is set to run at the Atlanta Fall Classics in Conyers, Georgia. There is still plenty of time to qualify for this finale event, held at the venue of the 1996 Summer Olympic Games. Points are still up for grabs during Week II of the Atlanta Spring Classics, as well as during the upcoming Jacksonville Spring Classic and the Charleston Summer Classic.