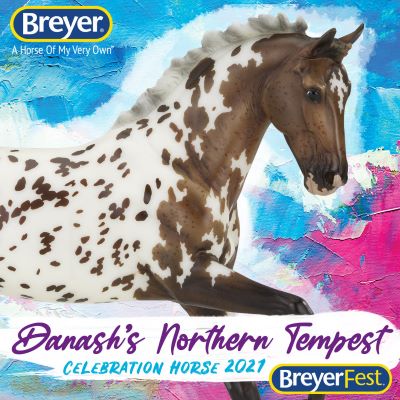 Wellington, FL (January 4, 2020) – Meet the BreyerFest 2021 Celebration Horse, Danash’s Northern Tempest, a.k.a. Dani! Dani will be the headline star of the 2021 BreyerFest Horse of a Different Color, held July 16-18 in Lexington, Kentucky. Her underdog story in the hunter rings with owner/rider Laura Reece and trainer Ashley Glica of ATG Equestrian truly embodies Breyer’s Horse of a Different Color theme for 2021, and models can only be obtained by purchasing a 3-day ticket for BreyerFest when they are released later this month.

But Dani’s announcement as Breyer’s 2021 Celebration Horse was just the cherry on top to a fantastic first week of 2021, as the striking 2013 Appaloosa Friesian mare was named Circuit Champion in USHJA 2′ Hunters at ESP’s Holiday Finale. The colorful mare also took a win in the Marshall & Sterling Medal Class and competed in the 15-17 Children’s Equitation division with Francesca Moore in the irons.

“We are just over the moon about Breyer choosing Dani as their 2021 Celebration Horse,” said Laura Reece of Palm Beach Sporthorses, which owns Dani. “Dani really has been an incredibly special horse for me, bringing me back into the show ring after a long time away, and she really captures the hearts of everyone she meets both in person and over social media. Thank you to Ashley Glica, who helped bring out the best in Dani as her trainer, and to Vestrum America, Fabbri Boots, and Zarasyl who have supported Dani’s journey. We are truly humbled and grateful for this amazing opportunity and look forward to more ribbons and BreyerFest 2021!”

Breyer Animal Creations® began as the Breyer Molding Company in 1950s Chicago. Its first model horse, the #57 Western Horse, made its appearance as a special order, and the resulting flood of requests resulted in its official inception. Today it is one of the world’s top collectible model horse manufacturers, and each year hosts its major collectible and equestrian event, Breyerfest, at the Kentucky Horse Park. Over 70+ years, the Breyer Model horses have become both a starting point for avid young equestrians and lifetime passion for horse lovers. Visit their website at www.BreyerHorses.com.

Danash’s Northern Tempest (a.k.a. Dani) is a 2013 Leopard Appaloosa Friesian cross mare (Danash K x Chief’s Bold Angel) registered with Friesian Heritage Horse & Sporthorse International as well as with the United States Equestrian Federation (USEF). Dani is owned by Palm Beach Sport Horses of West Palm Beach, Florida and is trained by Ashley Glica of ATG Equestrian in Loxahatchee, Florida. Dani was born in Michigan and bred by Jessica Bowman of North Horse Farm in Cheboygan. She was purchased as a filly by Jessica Collins and relocated to Southern Florida where she was slowly and properly started under the close eye of Brandy Rivas at Equines and Equestrians in Southwest Ranches. In 2017 she was purchased by Palm Beach Sport Horses, and makes her home at ATG Equestrian in Loxahatchee. Under the keen eye of ATG’s Ashley Glica, Dani has quickly become an exceptional sport horse, winning Circuit Champion in Rusty Stirrup at ESP in 2019-2020 as well as several notable ribbons in Hunter Derby, USHJA, and Green Hunter Classes at the 2020 Winter Equestrian Festival (WEF) in Wellington, Florida. She has also spent the fall perfecting her style in the hunter ring, including numerous USHJA National Hunter Derbies and the Low Children’s Hunter classes.

While Dani is not the typical Hunter horse, she is a shining example of her lineage’s versatility and a divergence from the typical sporthorses seen in Wellington. She has been recognized through a multitude of media outlets and has an active, engaged, and quickly growing following on social media. She is the Fall 2020 cover model for Equine America magazine, and along with Laura Reece of Palm Beach Sporthorses was the October 2020 cover for Wellington Magazine. She was profiled in Chronicle of the Horse in early 2020, has starred in numerous fun and fashion photo shoots, and was chosen to appear in an editorial for famed children’s photographer Olesja Mueller for publication in La Belle Kidz magazine. Much of her popularity has come from social media where she has her own Instagram account: @danithewonderhorse.

To keep up to date on all her shows and events, visit her website www.DaniTheWonderHorse.com.