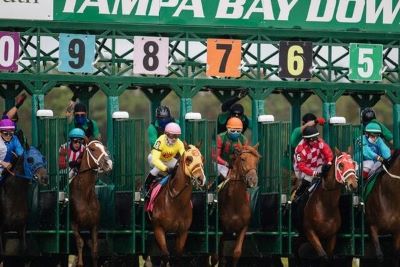 Steven Asmussen is one of the most distinguished horse racing trainers in the United States, achieving victories at the Preakness Stakes, Belmont Stakes, and the Breeders’ Cup Classic over the course of his career. However, the 55-year-old has been thwarted in his attempt to win further crowns since 2017 when the last of his great horses, Gun Runner, triumphed in the Breeders’ Cup Classic.

Gun Runner was named the American Horse of the Year for 2017 before signing off his career with one final run at the Pegasus World Cup, winning the title for the first time for Asmussen. Since then, there have been no notable successes, but the daughter of Gun Runner, Echo Zulu, could be about to change his fortunes.

Echo Zulu is the favorite in the Breeders’ Cup Fillies Juvenile event with odds of +150, although Asmussen does not have a proud history in the race, failing to win the previous 13 contests. Echo Zulu has exhibited the quality of her father on the track in the fledgling stages of her career, but delivering on the grand stage will be a challenge amid the talent in the race.

Even Gun Runner had issues competing against elite charges before he found his form at the top. He participated in the Kentucky Derby in 2016 and was one of the leading contenders after winning the Louisiana Derby. Gun Runner was competitive in his first Grade One race, but he could not cope with the pace of Nyquist, finishing four-and-a-half lengths behind the winner.

The American thoroughbred also underwhelmed as a three-year-old in the Haskell Invitational and the Travers Stakes. It took time for him to find his feet among the elite, returning to the track with vigour as a four-year-old. He won the Stephen Foster Handicap, Whitney Stakes, and Woodward Stakes ahead of the Breeders’ Cup Classic.

Arrogate was the favorite for the race, having bested Gun Runner in the Dubai World Cup earlier in the year. However, Asmussen’s charge turned the tables on his rival to win the crown ahead of Collected, with Arrogate placing down in fifth. It was a flawless performance from Florent Geroux in the saddle, bringing out the best in Gun Runner. They signed off together with a victory at Gulfstream Park in the Pegasus World Cup, enjoying the perfect end to a career at the top.

Gun Runner has appeared to pass his skills down his daughter, who dominated her first race at Saratoga. She then built on her performance in the Spinaway Stakes at the same venue, finishing four lengths ahead of the rest of the field. Echo Zulu has momentum on her side ahead of the contest as a two-year-old.

Asmussen could well have a champion on his hand in the Fillies Juvenile along with other leading events next season such as the Kentucky Derby. He has endured a four-year drought without a major crown, but courtesy of his former champion, the Texas-based trainer could well be on the way back to the top starting at the Breeders’ Cup.