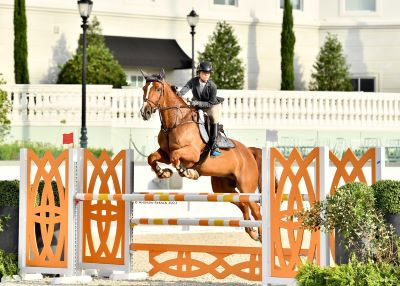 Ocala, FL (June 25, 2022) – The World Equestrian Center (WEC) Ocala’s breath-taking Grand Arena seems to be destined as the stage for history-making equestrian performances. Flanked by majestic columns reminiscent of the Parthenon and the gorgeous white facade of the hotel and convention center, a phalanx of flags and memorial to war horse Staff Sergeant Reckless welcome competitors to this larger-than-life equestrian center. During the WEC Summer II show, held June 15-19, 2022, Athena Lekkas of Elpida Equestrian drew inspiration from the WEC to complete her highlight show weekend, jumping her highest ever class in the 1.20-1.25m with her mount, Karthago Di Cabra.

Lekkas, with the support of her family and coaching of Ashley Glica and Olympian Darren Chiacchia of ATG Equestrian, utilized her experiences at WEC to grow as a rider and horsewoman. Having competed for the past few years at the 1.10-1.15m level, advancing to the 1.20m divisions marks significant progress towards the eventual goal: Grand Prix. With only a handful of faults over two rounds at this new height, Lekkas returned home to south Florida with the determination and focus to perfect her strategies in the saddle and relationship with her horse Karthago.

“We jumped a few 1.15m rounds early in the week, and I worked on getting tight distances and using my aids to be sure Karthago jumped clean,” said Lekkas. “Darren and Ashley did a great jump tuning both he and I up for the 1.20m. Now that we’ve jumped at this height, I know what we need to work on at home so it becomes second nature. Then we can go in the arena with confidence and not think about anything but the ride. The highlight of the week was definitely riding in the Grand Arena at WEC; it really improved my confidence. My favorite thing about Karthago is in the show ring he really just feels like he can soar.”

As a rising sophomore in at The Benjamin School, Lekkas is a determined rider whose goal is to ride at the Grand Prix level before she graduates. Her main competition mount, Karthago Di Cabra, is a 17.3h Belgian Warmblood gelding. A stunning golden chestnut, Karthago’s scope and presence have helped Athena move closer to her goal of jumping the 1.20m divisions and beyond under the tutelage of Ashley Glica of ATG Equestrian. Inspired by her own Greek and Puerto Rican heritage, as well as her passion for show jumping, Lekkas competes under her brand, Elpida Equestrian.

Elpida comes from the ancient Greek word ἐλπίς (elpis) – the personification and spirit of hope in Greek mythology.

Lekkas began her riding career at 9 years old, when a birthday party and subsequent summer camp ignited her passion for horses. She competed in her first show at the Jupiter Horseman’s Association, where she received Grand Champion in the 2-foot Jumpers and Equitation. From there she progressed quickly, building her skill under the guidance of Michele Blair of Desert Rose Ranch, Michael Dorman of Wyndmont, and Sebastian Robayo of Amparo Equestrian.